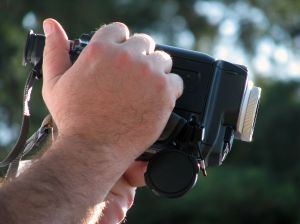 If you call yourself a geek in the slightest, chances are that you’ve been playing copious amounts of Halo:Reach over the last day or so. If you’re not a geek, allow me to explain. Halo:Reach is the final installment in one of the most popular video game franchises of all time. Oh, there may be more Halo games, but the developers have turned over the property, so this is the last game they’ll be doing, at least for a long time. For fans, it’s a big deal, and I’d be really surprised if this game doesn’t break all sorts of sales records.

To the point, Allison. Blogging tips, not video games!

Today, I wanted to talk a little about videos and how I used to be scared out of my mind to do them. (Still am, if we’re being honest.) Fear is a total buzzkill for bloggers, and although many say that they don’t do videos for any number of reasons (I don’t have a camera, I don’t know how to upload videos, I don’t have a good place to record them, etc, etc, bullcrap etc.), the real reason that most bloggers don’t do videos is that we’re scared of them.

It makes sense for bloggers to be uncomfortable at the prospect of recording videos. We spend most of our time behind a computer screen. Heck, there are some days that I don’t even put on pants (my apologies for any visual that notion has given you). People judge us by our thoughts and ideas, not by our looks, and that is extremely liberating. So, adding videos? Ugh.

Let me tell you a bit of a story, and the reason I started off this post talking about Halo.

Back when the Halo series was a lot younger, I used to play with three friends of mine. You can play Halo either online or locally, and we would just play locally because our Internet connection wasn’t really good enough for online play. It was a lot of fun, and since I was playing with friends, I felt comfortable and secure with my skills, even though they were all a lot better than me at the game.

Then, I started playing online a bit. I was able to get a connect that was good enough to play with people from around the world, and with my gender-neutral name and lack of girly customizations, I was just another one of the guys. Usually, I ended games middle of the pack – I wasn’t an outstanding player, but I also wasn’t a joke.

One weekend, my friends asked if I wanted to play with them in a tournament. My initial reaction was to say yes, but then I realized that I’d be meeting the other players face to face. That prospect intimidated me a little. Well…a lot. I was afraid that people would write me off as any kind of competition, just because I am female. I was afraid they’d laugh at me or roll their eyes every time I died. I knew then as I know now that I’m not, by far, the only female gamer in the world, but all the other girls seemed so good at Halo…and so pretty and so cool. I was self-conscious and afraid to take my gaming beyond the screen and into the real world. It was easier just to hide.

I ended up going to the tournament after all, and you know what? A few guys commented how it was nice to see a girl there (there were only two of us in the room I was playing in, out of 20-30 people total). Other than that, I was the same as I was behind the television screen – just another gamer. I’m guessing that some guys inwardly made fun of me or felt like I didn’t deserve to be there, but the general feeling I got from almost everyone was that we were just there to play the game.

And as I looked around, I realized that we all had things to be self-conscious about. While I was worried about being a girl, I’m sure other people in that room were feeling self-conscious about their weight or height or even skin color. We all have insecurities. So what? None of those things matter when playing a video game, and because we all showed up despite our insecurities, we had a total blast that day.

And for the record, I ended up middle of the pack again. So, that just went to show that people were playing with me in real life the same way they played with me online, where they probably assumed I was male.

I began to realize a few months ago that I was having a Halo Moment about posting videos on my various blogs. I’m self-conscious and insecure about my looks and voice, and I worry that readers will roll their eyes or not take me seriously. It’s easier to hide behind the computer screen and control what everyone sees by choosing what pictures of myself to post.

Do you need videos on your blog? No. Will they increase the value of your blog, help you find new readers, provide extra income opportunities, and just all-around show that you rock? Yes. Yes, they absolutely will. I was avoiding them for a long time, but the truth of the matter is that almost every blog out there could use a few videos.

So, a few weeks ago, I took the first step and ordered a Flip video camera. You all (well, most of you – I won’t speak for everyone) don’t care what I look like or what my voice sounds like. Neither do the readers of my other blogs. You care about my message.

I deleted the first video I made because I didn’t think I looked cool enough. That was a stupid Halo moment, because it was actually a decent video. It’s a process, learning to get over the fear of making videos for my blogs. I’ll get there, and hopefully have some videos to post in the coming months.

I hope you’ll take the first step with me by starting a fund today to buy the equipment you need to start making some videos. Or, if you already own even a crappy webcam, recording a few minutes to post on your blog.

At least track me down at BlogWorld and make a video with me. 🙂