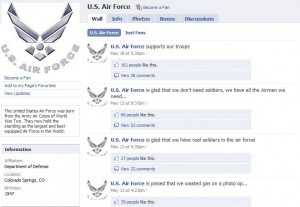 Yesterday, my esteemed colleague talked about whether or not blogging has officially jumped the shark.  Today, we’re wondering what the term will be when it comes to Twitter and Facebook now that news is surfacing that in addition to the White House joining into the social media fray, now the U.S. Military is doing the very same thing as they’ve officially adopted not only a Facebook page, but a Twitter as well.  The most surprising, and strangely impressive thing is they are actually using Tweets to spread and deliver “hard news” to those that usually get their information online, rather than printed services.

That’s right, the U.S. Military effort in Afghanistan is actually using social media to help aid an entirely new communication effort.  When asked why the change of heart, as they famously created their very own video sharing site called TroopTube that was more secure than the conventional YouTube, the Military was actually pleasantly open about their motives.  They were quick to say that they are using both their Twitter and Facebook page to:

Sounds good to us.  It’s just amazing to see how far the spread of both popularity and usefulness both of these services are seeing.  What started as an extremely brief way to alert those around you as to exactly what you were doing has turned into a full-blown way to not only communicate news, but also receive it as well…a fact the Military seems to be counting on, at least in a supplementary way.  Jumped the shark?  Nah, I think it’s just holding onto it’s fin and is using it to go a whole lot further, a whole lot faster.