IAWTV sponsored an awesome video track at NMX 2013, and after the conference, they also hosted an awards ceremony for web TV content creators. NMX sponsor .tv got a chance to work the red carpet, interviewing some of the nominees and winners.

But in this case, the question wasn’t “Who are you wearing?” Instead, correspondent Mark Yoshimoto Nemcoff asked these top content creators to share their very best tips for up-and-coming video creators. Check out what pros like Kristyn Burtt, Grace Helbig, Goldie Chen, Chris Hardwick, and Tim Street had to say:

Many winners and nominees at the IAWTV awards were actually speakers at NXM 2013. Want to see their presentations? You can get all of the conference recordings as a premium member of NMX University with our 2013 Virtual Ticket. Learn how to sign up here.

Today, C.C. Chapman is our featured “Five Questions with” guest in the latest episode of BlogWorld TV. We’ll find out what C.C. is looking forward to at BlogWorld & New Media Expo New York (he’ll be signing his book, Content Rules, there!) and his plans to visit Book Expo America (BEA), which is co-located with BlogWorld. 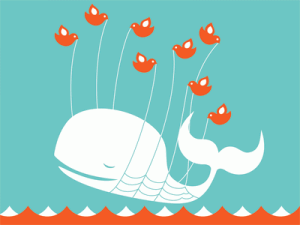 I’m going to be straight up front and honest with this little gem of news:  I’m a bit terrified.  Rumors are surfacing that Twitter is in talks to develop a television series.  Yes, you heard me right, Twitter wants to be on TV.  In a word, wow.

If all goes according to their perceived plan, Twitter will be pairing up with Brillstein Entertainment and Reveille Entertainment to produce a new television show that, by the sounds of it, will combine their instant and real-time service with reality television.  According to reports:

“…the concept consists of “putting ordinary people on the trail of celebrities in a revolutionary competitive format.”

Again, Wow.  So we’re going to have yet another reality television show to keep track of, with yet another social networking method to keep track of it.  Before long we’ll see Survivor contestants tweeting, people on those Real World shows engaged in intense Twitter Battles and the Top Chef’s getting their challenges via Tweets.  Yikes.

What are your thoughts on this?  Is it a good thing that Twitter is going this mainstream, this involved and this “real.”  Will a television series based on this actually work?  I know it’s going to be completely dependent on what actually happens in the upcoming show, but for now it’s just a bit scary that it’s happening at all.  What’s next, “Facebook:  The Movie?”

Time will tell, and we’ll all be waiting to see what goes down.