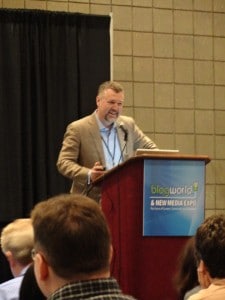 56% of Americans have a personal profile on a social network.

22% of Americans – about 58 Million people – use social media sites every single day.

These are just a few of the stats Tom Webster shared during his session, “The Social Habit 2012: How Americans Real Use Social Media.” Tom works for Edison Research, and his presentation revealed some interesting – and even surprising – facts about today’s social media users.

Facebook is still killing it when it comes to social networking, but that doesn’t mean other networks aren’t growing at all. Twitter, for example, has seen some interesting growth. About 26 Million Americans use Twitter, but even more interestingly, people are starting to become more engaged on this network. People aren’t just “silent users” watching that is going on – they are no using the network more to send tweets.

In addition, more than four in ten Americans hear or read about tweets nearly every day in the media, even if they don’t have a personal profile on Twitter. Says Tom, “I have to believe the amount of content that gets shared, the way it gets shared…it’s changing the way we process and learn information.

Another interesting group of stats Tom shared was about how people follow brands on social media sites. Most follow on Facebook, which is unsurprising, but what is notable is that people are becoming more aware of how they’re following brands online. Fewer people are simply hitting the “like” button and are instead making a conscious decision to follow brands they like online. 33% follow a brand on social networking sites – this number has doubled since 2010.

This is just a small taste of the stats Tom shared, alone with his dissection of what these stats mean. Want the whole thing? Check out our virtual ticket, which gives you access to full recordings of all of the sessions you may have missed at BlogWorld New York 2012! It’s great for those of you stuck  at home or for those of you already at BlogWorld and worried about missing sessions you want to see. (And if you’re on the East Coast and don’t yet have a ticket, there’s still time to head over to the Javits Center in New York to check out Wednesday and Thursday sessions.)

A little while ago, I compiled a list of the 25 Social Media Posts that I think everyone should read. If you haven’t checked it out yet, do so – there are some fantastic posts on that list from bloggers who live around the world.

Life keeps truckin’ on, and since then there have been some absolutely brilliant posts published about social media. Let’s take a look at 10 MORE social media posts that everyone should read. Note: this list is in alphabetical order, not in order of important/value.

Since this change, the emphasis has shifted slightly from gaining more likes (fans) to increasing the number of shares on each piece of content. When you craft your fan page updates in a manner that naturally inspires fans and their friends and visitors to your page to share with their networks, you set in motion ripples of viral visibility. Basically, free additional exposure.

1. The Law of Listening

Success with social media and content marketing requires more listening and less talking. Read your target audience’s online content and join discussions to learn what’s important to them. Only then can you create content and spark conversations that add value rather than clutter to their lives.

This is just the first of ten super smart “laws” when it comes to using social media for your business. I’m not a fan of rules that people say you have to follow, but these are really smart guidelines to use if you want to grow your network.

With the breadth and depth of social media services out there, it’s no wonder that we often find ourselves lost in the vast array of services. Further, those who are seasoned may seem at a loss in the apparent “simplicity” of it all. I took the opportunity to contact some of my esteemed friends and colleagues who are experts in their field and asked for their advice on their favorite little known social media secret and social media tools, including their own if they had them.

A True Measure Of Influence by Tom Webster (@webby2001)

An influence score makes assumptions about the value of your follower count, how many people click on your links, etc., and then bashes those assumed values together with yet another set of assumptions – their supposed relationship to each other. Yes, there are mathematical functions involved, but just as the “likely voter model” many pollsters use for pre-election polls can never predict whether or not a specific individual will actually vote, the influence score will never be able to predict the impact of an individual on the behavior(s) you are trying to influence.

If you’re a stats geek like I am, this is the post for you. Do numbers like Klout score really matter? Yes – but if you actually want to measure influence, you can’t stop there. As Tom suggests, you have to develop your own performance measures if you want to truly understand your social media influence.

Over the past few months, I’ve had several discussions with people that are working in this space as the umbrella term of a ‘social media consultant’.  What prompted me to write this post was because several times I have heard from friends that are struggling, and they assume that since they are struggling, that it’s a direct reflection on their abilities as a consultant.  They also assume that most consultants are doing extremely well, so if they aren’t, that further cements the idea that they just aren’t ‘cut out’ for this type of work.

If you’re considering leaving your job to work in the social media industry, this is a post I highly recommend reading first. Mack’s post doesn’t just talk about the fact that it isn’t all unicorns and rainbows out there; it also gives some pretty great advice for becoming successful in this industry.

I firmly believe that if you talk and act just like you do in the real world when face-to-face with people you’ll do well. Sure, that is over simplifying things, but at the root of everything I do believe this. Of course this means that if your a jerk in person…well you know what that means. *grin*

Having a conversation shouldn’t be a chore. You either enjoy talking with people or you don’t. Twitter and social media are not for everyone.

I really dislike it when people assert that there’s only one right way to do social media, so this post resonates with me. I think one of the reasons my personal network is continuously growing is that I’m totally myself online. I’m a little more outgoing, perhaps, but what you see is what you get – and people like that.

Social networking is one of the latest challenges facing parents today. As both a common form of communication between peers and a source of information, social networks are becoming increasingly difficult for parents to ignore or shrug off as a simple trend. Parents are challenged with not only reading the signs of their child’s mood and general demeanor; they have to maintain awareness of what they go through online.

Cyberbullying is a big deal, and the ramifications of it can last well past a person’s high school years. In 2010 alone, 34 teens committed suicide as the result of cyberbullying that took place on personal Web sites, social networks, and various other forums across the Web.

What I’d like to add to this is that it isn’t just kids who are bullied via social media. Just because you can say something anonymously doesn’t mean that you should say it. Think about the things you post online, especially as they relate to other people. Build people up; don’t break them down. Kids look to us as role models, so it’s up to us to set a good example and refuse to take part in online bullying.

When it comes to driving traffic to your website, there are a variety of ways to get visitors. The primary two that individuals and businesses almost always have a struggle with investing their time and money into are search and social. Sometimes the issue is convincing people why these are a necessity for a thriving business. Other times, the conflict is whether to invest in one marketing strategy more than the other, or to only pursue one marketing strategy but not the other.

I think this is an awesome post about two of the very best ways to drive traffic to your website. Of course, you don’t have to choose one or the other, but determining where it makes sense to focus your attention can help your site (and by extension, your business) grow.

The Next Layer of Social Media by Mitch Joel (@mitchjoel)

Where is social media going? I don’t know that Mitch Joel knows the answers (and he isn’t claiming to know them), but I do think that this post is a really smart way of looking at the future of social media.

Top 10 Social Media Fears that Go Bump in the Night and How to Make Them Worse! by Liz Strauss (@lizstrauss)

It’s the middle of the night. The wind is blowing. The moon is high. Creaking noises are sounding. Memories of comments are running through your head, and you’re thinking of emails you sent that went unanswered.

You had such hope when you started in social media. It was daytime. You were always laughing then. Now you’re just shell of yourself in despair, dejected, and broken. Your socmed fears have taken over with the things that go bump in the night.

Fear is a paralyzing thing for some people, myself included. When it comes to social media, sometimes the fear of doing something wrong can keep us from being truly successful. This is an older post that Liz revamped for Halloween – and I’m so glad she did. I love it when bloggers bring old, awesome posts to the surface again.

Now it’s your turn! Leave a comment with the best social media post you’ve read in the past few months.