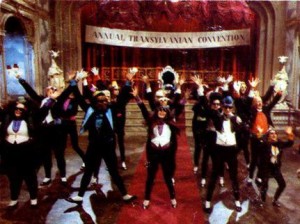 Let’s do the Time Warp again! (My apologizes to those who don’t get this absurdly geeky reference.)

Twitter is one of the most important promotional tools you can use as a blogger, but the social networking site does have one major flaw, from my perspective. Apparently, it sits on top of some giant time-space rift that rips open the moment I log online. Maybe I watch too much Dr. Who, but I swear, I only mean to use Twitter for a few minutes in the morning, and when I look up, it’s mid-afternoon. Someone get Stephen Hawking on the phone to explain this to me.

I’m perhaps unfairly singling out Twitter, because that’s my personal poison, but I’m told there are also time warps, black holes, and giant time-sucking worms associated with Facebook, Google+, LinkedIn, StumbleUpon, and just about every other social networking or bookmaking site out there. Are you also finding yourself frustrated with the time you sink into social networking?

I look back on the days where I did everything manually and laugh. What was I thinking? When I published a post, I used to spend over an hour logging onto all of my profiles to promote it. With almost every social site, you can find automation tools that will cut this time down to nil. Twitter, for example, has Twitter Feed, which will look on your blog every hour or so (you set up the time parameter) and auto-post anything new.

It takes time to set up automation tools, but wouldn’t your rather spend a few hours one afternoon doing it than tons of time every day trying to manually promote your posts?

Should you have one account on a social networking site, where you combine business and pleasure? Or should you have accounts for every blog, as well as a separate personal account? It’s a debate that will continue to rage in the blogging world, and perhaps there is no right or wrong answer. If you want to save time, though, I recommend streamlining everything into one account.

Of course, this is probably not the best choice if you run two or more blogs in completely separate niches. For example, at one point, I was writing for a wedding blog and for a college football blog at the same time. Not a lot of overlap in readership there. But if you’re writing for a single blog or blogs in closely-related markets, having a single Twitter account makes sense. You want people to know you as “that beer blogger guy” or “the chick who knows about shoes.” Throwing in your personal Tweets just makes you more human.

I will say this: I do have one account that is just for friends and family members, and I recommend you do the same. For me, it’s my Facebook profile. I have a fan page for my blog, but to become my friend you actually have to be my friend in real life, not just a blog reader. You could choose another profile to limit, but I recommend doing so for personal friends who want pictures of your kids and not hundreds of links to a blog that doesn’t interest them. So, separate in one place, but keep everything else streamlined.

Trying to use Twitter through the website itself is time-consuming. A third-party application that can sit on your desktop is much more customizable, and I’m recommending TweetDeck because it integrates with Facebook and LinkedIn. Other options are out there, too. (Lots of people like Hootsuite for example.)

Any third-party client is only as efficient as its user. At first, I couldn’t see the benefit, but then I started really playing with the columns and notifications features, and I set up groups according to my needs – blog reader I know personally in one column, bloggers I enjoy in another, mentions in a third, and so on. I’m not constantly logging onto Twitter during the day and wading through hundreds of Tweets to find ones that interest me.

Before ending this post, I just want to remind you of the best time-saving tip of all: turning it off. Yes, social networking is super important for bloggers, and without it, you’ll have a hard time establishing a new blog or retaining readers. I’m not saying that you should tune it out forever. However, writing great posts needs to be your number one task. If you don’t have time to maintain your blog because of social networking, what’s the point?