Last week the Association of American Publishers (AAP) released news regarding January 2011 book sales – saying that e-book sales are up 115.8% since January 2010. Downloadable audio books also rose, but at a much smaller rate (8.8% over the previous year). 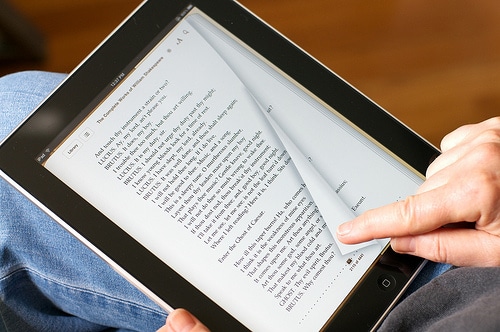 Overall, total book sales dropped on all platforms by 1.9%. The biggest hits were to the adult mass market (down 30.9%) and adult and children’s paperbacks (down almost 20%).

The two areas that seemed to grow over last year were sales of religious books and professional/scholarly books.

While e-book sales are definitely still on the rise, they still account for less than 10% of total book sales. I’m sure this will change over the next few years as the publishing industry attempts to work out pricing models and licensing models for the e-books.

Do you use an e-book reader?

In my “free time” outside of BlogWorld, I’m an author. I’ve written three young adult novels in the past two years and currently have one out on submission to publishers. As you can imagine, I spend a good amount of time networking with other authors, agents, editors, etc. Topics of interest include a variety of items – especially the use of social media to foster buzz for an author and their book.

I’ve seen several authors generate buzz using Twitter and their blogs – but the most successful ones are those that develop and foster their brand and voice with social media (in all age groups and genres). My favorite example is Kiersten White. For the weeks leading up to the launch of her debut novel, Paranormalcy, Kiersten used social media to showcase her humor, wit, and creativity – building an audience and buzz that took her to the New York Times Bestseller list the week that Paranormalcy hit store shelves!

So what are some examples of Kiersten’s social media efforts and writing style? For weeks prior to launch, Kiersten took to Twitter with tweets that centered on a hashtag she created (#everytimeyoupreorderparanormalcy). Here are just a couple (but there were hundreds of them!)

#everytimeyoupreorderparanormalcy a muggle-born kid gets accepted to Hogwarts.

#everytimeyoupreorderparanormalcy Snow White, Sleeping Beauty, and Cinderella grow a spine, save *themselves*, and head to college.

Kiersten also spent time on her blog – writing posts that featured her book, but also showcased her fun and self-deprecating humor (like this one and this one).

But did this voice translate over to Paranormalcy? Absolutely. And that’s why it worked. If Kiersten’s writing was dark and mysterious, her social media audience would’ve been rather stunned to expect humor and read twisted.

Lastly, Kiersten took time to respond to pretty much everyone who engaged in a conversation – whether it was on Twitter or comments on her blog. She was gracious and caring and never made a fan feel uncomfortable for contacting her.

So my tips for authors looking to use social media to generate buzz for their book: Be Honest, Be True to Your Voice, Be Original & Engage in Conversations

In last night’s #yalitchat (a weekly Twitter chat for the young adult writing industry) we also talked about social media and buzz. Some great tips and thoughts include: