In 2008, my best friend and I (along with a third writer that he knew and, a few months later, an intern who later became one of our writers) decided that we wanted to start our own video game blog. We were sick of reading sub-par writing on blogs where integrity seemed to be an afterthought. We we tired of seeing rumors billed as news. We were tired of the same rehashed top ten lists that usually featured an abundance of scantily-clad gamer girls and little to no substance. Our site, our baby, it would be different. 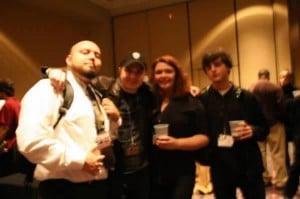 When it comes to the gaming niche, “if you build it they will come” is actually true. You have to do a little promotion, but heck, we weren’t even on Twitter or Facebook for the first few years and we had a ton of traffic relative to most young blogs. Write an opinionated piece and you can easily get 100+ comments. That’s not something you get with most niches.

We were young and collectively had veins filled with tiger blood before it was a fad. People were responding well to us – we were getting a lot of great feedback, subscribers, and link love. We really were building something different from the other blogs in our niche. And we were proud. We were damn proud.

Then suddenly, it stopped being fun. It became work. We were young; we knew nothing of monetizing a blog, especially an entertainment blog (notoriously harder to monetize than most niches, especially when you cater to a young, broke audience). sure, we enjoyed recording a podcast every week and attending conventions with press passes, but we were becoming less and less passionate about the actual topic. We had proved that it could be done. One really could run a high-quality video game blog that was consistently funny and didn’t rely on lies rumors or other cheap gags to pull in hits.

We took breaks to try to combat burnout. We introduced weekly and monthly features to try to keep us motivated. We moved toward doing more opinion pieces so we could write topics we were passionate about. Except we weren’t. Passionate, I mean. We had lost that fire, that driving force, it was gone.

Yet, we still held on. We decided to shut down for a few months over the summer and do a huge relaunch in the fall. We planned out every detail, this time with business in mind. I had been working for BlogWorld for a few months and was gearing up for my first ever BlogWorld, and in doing that, I had learned so much about making money. We had the content down in the past. We had the traffic down in the past. We could do this again, but as a business.

At least we told ourselves we could. The site was our baby. It couldn’t end. It just couldn’t. Think of the posts we had written – thousands! Think of the time we spend modifying free themes to be completely one-of-a-kind. Think of the thousands of hours we had collectively put into this site. We deserved success, damn it.

So we feigned passion. We weren’t lying to one another. We were lying to ourselves. When we relaunched, we did so with gusto, and even with our lack of undying passion, we did still write some thoughtful, outstanding posts that were better than nearly everything else out there in the video game niche, in my opinion.

At the core of this story, though, is the kernel of truth that we didn’t want to admit – we were just holding on. We didn’t want to let go of something we had loved so dearly in the past, so we told ourselves we were still in love, even though we were luke-warm at best. It wasn’t a question of whether we could produce quality content; it was a question of whether we wanted to. 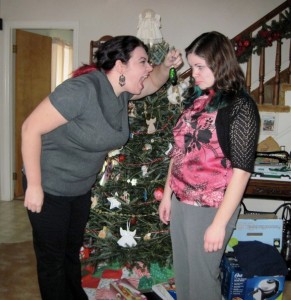 So finally, in December 2010, after nearly three years, we finally let go. Oh yes, there were tears. There were certainly second thoughts and feelings of failure. But it was time. In all honesty, it had been “time” for over a year. Holding on wasn’t doing us any good as writers, as business owners, or as people.

Every Christmas morning, my sister and I battle to find this glass ornament shaped like a pickle. (This has relevance to my story, I promise.) You’d be amazed how well it blends into the tree – my mom puts up a fairly small tree and yet it still usually takes several minutes to find it. It’s an old German tradition; the person who finds the pickle on Christmas morning has good luck for the entire year. It’s been a joke in our family that I’m unlucky because I never find it. My sister (or occasionally a significant other we bring home) ALWAYS finds it.

This year, as I was peering between branches and waiting for my sister to squeal that she found it once again, I saw it. It was mine, suckers. The picture I used is actually part of a tradition too – every year we take a picture of my sister gloating and me pretending to cry because I was set to have another unlucky year. A picture of me winning was long overdue, so I really hammed it up (you can’t tell, but my sister is trying SO hard not to laugh). I texted everyone who knew of our little tradition: “Get ready – it’s Allison’s PICKLE YEAR and because you know me, you’re going to have an awesome year too!”

Since then, my life has taken turn after amazing turn, especially in terms of my business. I won’t go into details, but let’s just say that it is culminating in me moving to D.C. – a city I absolutely love, but have been unable to afford in the past. Oh, and my best friend (who is also my current roomate, at least for another 24 hours or so) – he got a full-time job with BioWare working on a Star Wars game. In the geek world, that’s a dream gig.

We joke (okay, half-joke, because I am a little superstitious) about it all being thanks to the pickle. Thinking about it logically, though, what else changed in December? We closed our site. I focused on building my own blog about career, on working with more freelance clients, and on doing the best job I could do here at BlogWorld. Now that the site was closed, I had the time and being less stressed made me a better writer. My best friend similarly was able to better pursue his interests in landing an industry job.

Holding on was holding us back. We so strongly didn’t want to fail that we didn’t realize that in holding onto this blog when we were no longer passionate was causing us to fail in a million other ways. We fought so hard for something we thought we couldn’t give up, but in the end, giving it up opened the door to new opportunities that we thought would only ever be dreams.

It’s our pickle year, and not because of a silly Christmas ornament, but because we let go. We gave ourselves permission to fail, because in the grand scheme of things, our video game blog was just a battle in a larger war to be happy and “win” at blogging.

I have to believe that because you’re reading this, the pickle has at least a little effect on you too. But in order to really feel its magic (yes, the magic of the pickle), you need to take a look at your blog and your business in general and let go. That might not be letting go of your blog completely like it was for us, but it means admitting when you no longer feel passionate about something you’re doing. It may seem like a failure now, but that failure could be exactly what you need in order to succeed.

So, I guess the moral of this long story is to look at what you’re going with a critical eye, always, and to be honest with yourself about your passions. People change, blogs evolve, and that’s okay. Don’t hold on just because you’re scared to let go.