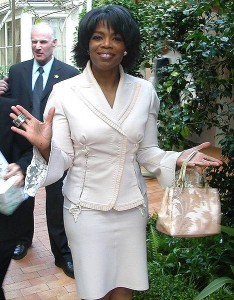 While searching for other blog posts about the recent hubub over the hypothetical possibility of Oprah Keynoting BlogWorld this year, I came across another post that stunned me and brought a whole new perspective to Kutcher’s million Twitter follower quest that I hadn’t considered before.

Blogger Clement Nthambazale Nyirenda has a post accusing Kutcher of exploiting the children of Africa in order to be the first person with one million followers on Twitter.

You really need to read the entire post before commenting, but I would sincerely appreciate your comments when you have read Clement’s post as well as this one.  For now, here is an excerpt:

Ashton Kutcher, an American based actor, is trying to use the Malaria problem in Africa in his quest for personal glory.  It all started when Ashton Kutcher challenged CNN for  Twitter supremacy. As I write, the online community is abuzz with Ashton’s competition with CNN to see who can be the first to attract 1 million followers on Twitter. Ashton has vowed to donate 10,000 mosquito nets to at-risk families in Africa on World Malaria Day if he wins the race by April 25. As a result, many people on twitter are following him simply because they think that by so doing, they are helping in the fight against Malaria in Africa.

I, for one, am completely against Kutcher’s motive. Why should I follow him on twitter for him to release the nets to folks who are suffering in Africa? This guy wants to use Africa for his own fame.

After reading the post, it took a moment for everything to sink in. Did Kutcher exploit the children of Africa?

I quickly concluded it was quite the opposite and wrote a long comment on Clement’s blog. At the end of that process it brought me back to the hue and cry from the Twitterati that Kutcher’s drive to one million was a sham and against everything Social Media stood for.  That still doesn’t sit right with me. I have said before and I will say it again, I think @aplusk absolutely gets new media and certainly as well as any celebrity who has crossed over into our world.

Yes, his one million followers dwarfs one of Twitters earliest adopters and champions  Robert Scoble (82,000 followers). It makes Jason Calacanis’ drive to become King of Twitter look like childs play.

But didn’t Kutcher just prove something that many have been saying about Twitter and Social Media all along?

Didn’t Kutcher just leverage his celebrity and social media to raise awareness and money for a worthy cause?

Isn’t it very similar to what @amanda did with the amazing Twestival event, but on an entirely different scale?

Starting as one person’s idea, Twestival involved tens of thousands of people and raised over $250,000 for worthy causes.

Kutcher’s drive to a million Twitter followers started as one person’s idea and raised $300,000 with just two checks. One from him and one from Oprah Winfrey. It also involved well over a million people in the social media space and millions more in the traditional media world. The CNN coverage alone was immeasurable to Malaria No More. 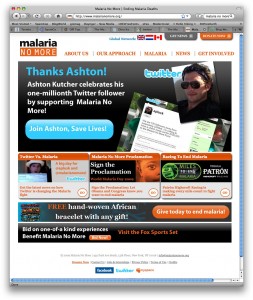 Some are saying celebrities’ new found fondness for social media will ruin it, but they are simply wrong. It will certainly bring a new set of problems that we will have to find ways of dealing with. There will be clueless celebs just as there are clueless businesses and other clueless people who try to use these tools the wrong way. As Beth Harte suggests, we should call them on it when they do.

Bottom line.  The change we have all been espousing for so long is finally coming. This is a good thing for all of us.

Here is the comment I left on Clement’s blog:

Wow your post may have been well intentioned Clement but you couldn’t be further from the mark.

Ashton Kutcher doesn’t need to donate 10,000 nets to Africa or $1 to anyone to raise publicity for his goal of reaching one million followers on Twitter. He could have done that without you, without the nets or anyone else.

Instead what he chose to do was use the occasion to make a very significant donation to a very worthy cause. You should be very grateful he chose a cause close to your heart instead of someone else or none at all.

Furthermore he just raised awareness of this problem to not just the one million people who followed him on Twitter, but the millions more who watched him on Oprah and all the publicity raised on CNN and every other news outlet in the world that covered this story.

This may have been the biggest publicity this cause has ever received and it is all due to Ashton Kutcher. Yes he could have given the money to buy these nets without ever mentioning it. He could have given the money anonymously. He certainly comes off as the type of guy who would do just that. But if he did that what would you have? 10,000-nets. No millions of other people now being aware of this problem and donating $5 and $10 here and there. No world wide publicity raising awareness of this issue.

What Ashton Kutcher did for the children of Africa was far greater in value than just give money; he gave you something very few people in the world could.

And what is his reward for doing so? You didn’t just look this gift horse in the mouth, you spit in his face.

I humbly suggest that you seriously rethink your position.

Two people I greatly admire have weighed in on the implications of the great Twitter Race.

Brian Solis may have the best post on this seismic shift yet.