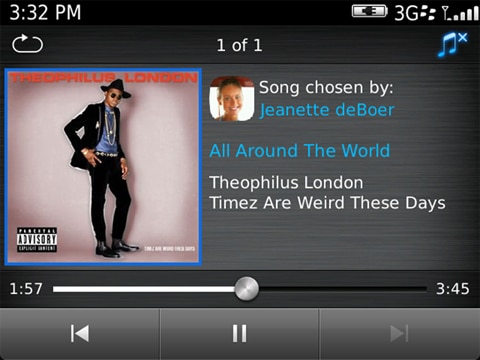 For those of you who own a Blackberry (did you know New York is a Blackberry dominated state?) a new social music service just for you has been announced. It’s called BBM Music and Blackberry made the announcement on their blog today.

The service works over Blackberry’s proprietary messaging platform where you can share songs and playlists with other BBM Music subscribers. The cost is $4.99 (plus tax) a month and includes access to 50 songs.

You can also discover more music via their catalog tab, as well as purchase songs directly from the Amazon MP3 Music Store.

BBM Music is taking the solitary experience of mobile music and is added a social aspect to it.

From the Blackberry blog:

BBM Music strikes a personal chord with me for two reasons. First, mobile music typically tends to be a solitary experience. BBM Music takes that solitary experience and makes it social with the people that matter to me most. Secondly, as life gets busier, I have less time to discover music (sad, but true). BBM Music allows my BBM friends to introduce me to the tunes I’m missing, and vice versa. I think BBM Music could become the “mixtape” for a new generation of mobile music users.

BBM Music is currently available as a closed beta to BBM 6 users in the United States, Canada and United Kingdom.

For those of you who use a Blackberry, is this a service you’re willing to pay $4.99 a month for? Sound off in the comment section.