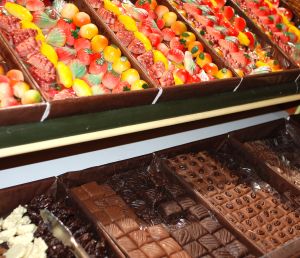 When I was five years old, I loved candy. Okay, who are we kidding? I still love candy. But this story is about me as a five-year-old so bear with me.

Halloween was of course one of my most favorite times of the year, and after a particularly good “haul” one year, my dad decided to give me permission to do the unthinkable – eat as much of my candy as I wanted. I felt like Scrooge McDuck diving into his pool of gold coins every time I reached into my pumpkin-themed bucket for another handful of candy.

You might be able to guess what happened next. That’s right, I ate so many Snickers and Twizzlers and whatnot that I got very sick. It was several weeks before I could even look at candy again.

The lesson my dad was trying to teach me was that moderation is key in whatever you do. At five years old, I was happy to eat candy until I was sick, but I wasn’t ready to pay those consequences. It never crossed my mind that I could have too much of something so amazingly good. I didn’t understand that more isn’t always better.

Your blog or podcast content is like candy. (Well, hopefully!) In other words, it’s really good, and people want it. Readers come to your site for their virtual sugar fix, like five year olds on Halloween flock to the house giving out the full-sized Hershey bars. At least, that’s the goal, right? You want your readers to love your content.

Only, too much content can give your readers a stomach ache.

Okay, maybe not a stomach ache, but if you’re posting too much content and your readers can’t keep up, it’s like eating too much candy. Too much of a good thing is a bad thing. I know you have a lot of ideas. I do too. But if you give people more content than they can handle, they’re going to unsubscribe.

How much is too much? That depends on your niche. Someone coming to a blog for news is probably going to want updates several times every day. That’s why a site like Mashable can get away with posting so often. In other niches, posting that often is obnoxious. People don’t have the time to read that much! For example, Social Media Examiner posts about once per day. They have a huge pool of writers, so several posts a day might be doable from a production standpoint, but their posts are so in-depth that it would overwhelm readers in a hurry.

You run the risk of getting boring too. For example, Jenny at The Bloggess posts a few times per week, but rarely more than once per day. Her blog is about her life – so she writes when interesting things happen. If she forced herself to post three times a day, half of those posts might be nothing more than, “Uh…so I had a chicken salad sandwich for lunch…”

It also depends on what your readers are used to. If you post once a week and then suddenly amp it up to post every day, people are going to step back in a very surprised way. This is especially true of your email subscribers. No one likes an inbox full of stuff they weren’t expecting, even if that stuff is really good content. So, if you want to start posting more content, slowly increase you post rate. Let people dip their feet in the pool and get in slowly rather than pushing them in when their backs are turned.