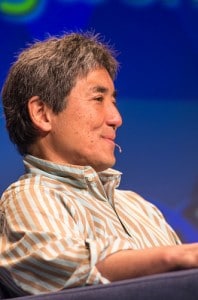 We always feel lucky when Guy Kawasaki is able to speak at one of our events. This year, Guy sat down with Mark Fidelman at NMX 2013 in Las Vegas to discuss in a keynote entitled “Going Bananas with Guy Kawasaki,” which covered a wide variety of new media topics, including a discussion on publishing in the new media world. Here are some of the highlights from his talk:

The session began by discussing self publishing, or artisanal publishing as Guy refers to it. After publishing What the Plus himself, he decided to write his newest book, Ape, to discuss the process. Guy used social media for feedback and reviews by sending out the outline, and later his full manuscript draft, for his book to “4 million of my closest friends,” as he referred to his followers. He would never have been able to do so with traditional publishing.

“Traditional publishers would have an aneurism!”

Self-publishing allows you freedom to do things like sending your content to followers before it is published. With self publishing, the writer has complete control over the book from beginning to end, but that also comes with all the responsibility and risk. Remember, Guy has a huge audience, so he’s able to self-publish and try new things while still knowing that he will sell a healthy number of books. If you don’t have this massive following yet, self-publishing might not be as successful for you. However, don’t overlook this as an option, especially due to the freedoms self-publishing affords you.

“Guy’s provided me with such great content all year, the least I can do is buy his $10 book.”

What’s Guy’s personal social media strategy? He compared it to NPR. According to him, they provide “great content 365 days a year,” and once in a while slam you with a phone-a-thon. In Guy’s eyes, they’ve earned the privilege to promote once in a while because of their commitment to quality content throughout the entire year. He applies the same principle to his social media accounts. He provides his followers with quality content so consistently that when he does stop to promote his newest project every now and again, he hopes his followers think, “Guy’s provided me with such great content all year, the least I can do is buy his $10 book.”

Of course, during his keynote, Guy also spoke about a number of other topics as well. Did you know that all of our keynotes have been live-streamed and archived? Head over to NMX University to see our keynotes and additional bonus content live from the show.

About Guy: Guy Kawasaki is the author of APE, What the Plus!, Enchantment, and nine other books. He is also the co-founder of Alltop.com, an “online magazine rack” of popular topics on the web. Previously, he was the chief evangelist of Apple. Kawasaki has a BA from Stanford University and an MBA from UCLA as well as an honorary doctorate from Babson College.

If you missed the twangout, check it out below. And be sure to join in on the fun at NMX and BusinessNext in January!

Want to see Guy Kawasaki live and in person? His keynote is Monday, January 7 at 8:30 am. We hope to see you there!

Note: The discount mentioned at the end of the video has since expired.

For those of you who are at BlogWorld Los Angeles, did you attend the Google+ for Business session with Guy Kawasaki and Chris Brogan? I sat in mainly because I am still trying to figure out this mystery we call Google+. It’s still a mystery to me as to how to use it, if I should use it and who is using it. 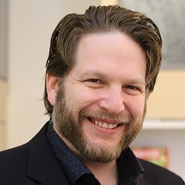 There have been dozens and dozens of articles written on how people think Google+ is not doing well or the fact that it’s doomed to fail. (Guy commented on the fact he can’t understand why the tech world seems so negative about Google+.)

What it seems most people want to know is why would they put any focus on Google+ when they are active on Facebook? More time on a social network? Are you kidding me? Most of us barely have time to focus our efforts on Facebook and Twitter, much less adding something else in.

But both Guy and Chris believe Google+ is a must for your business. They listed a bunch of reasons why, but the one quote that stuck out to me the most was when Guy gave his opinion on the difference between Facebook and Google+.

He said, “For me, Facebook is for friends and family and Google+ is for people who share your passion that you don’t know yet.”

What does he mean by that exactly? He means that Google+ is full of people who are passionate about a specific subject. He’s found communities based around everything from photography to hockey. And within these communities, you can build a relationship with people who share the same passion as you.

They both gave many more reasons they believe NOW is the time to get involved in and active on Google+. If you want to hear their session, be sure and check out the BlogWorld Virtual Ticket.

Two of Google+’s biggest supporters are coming together to present a track keynote called “Google+ for Business.”

Guy Kawasaki and Chris Brogan will share the reasons why Google+ is their social network of choice as well as why they feel Google+ will become a force to be reckoned with over the next few months.

Do you want to get ahead of the game? Drop in to their track keynote on Thursday, November 3rd at 9:45 to learn how both bloggers and business owners can use Google+ to succeed in business.

Please visit BlogWorldExpo.com for a complete rundown of all our speakers, sessions, workings, networking events, track keynotes and keynotes.