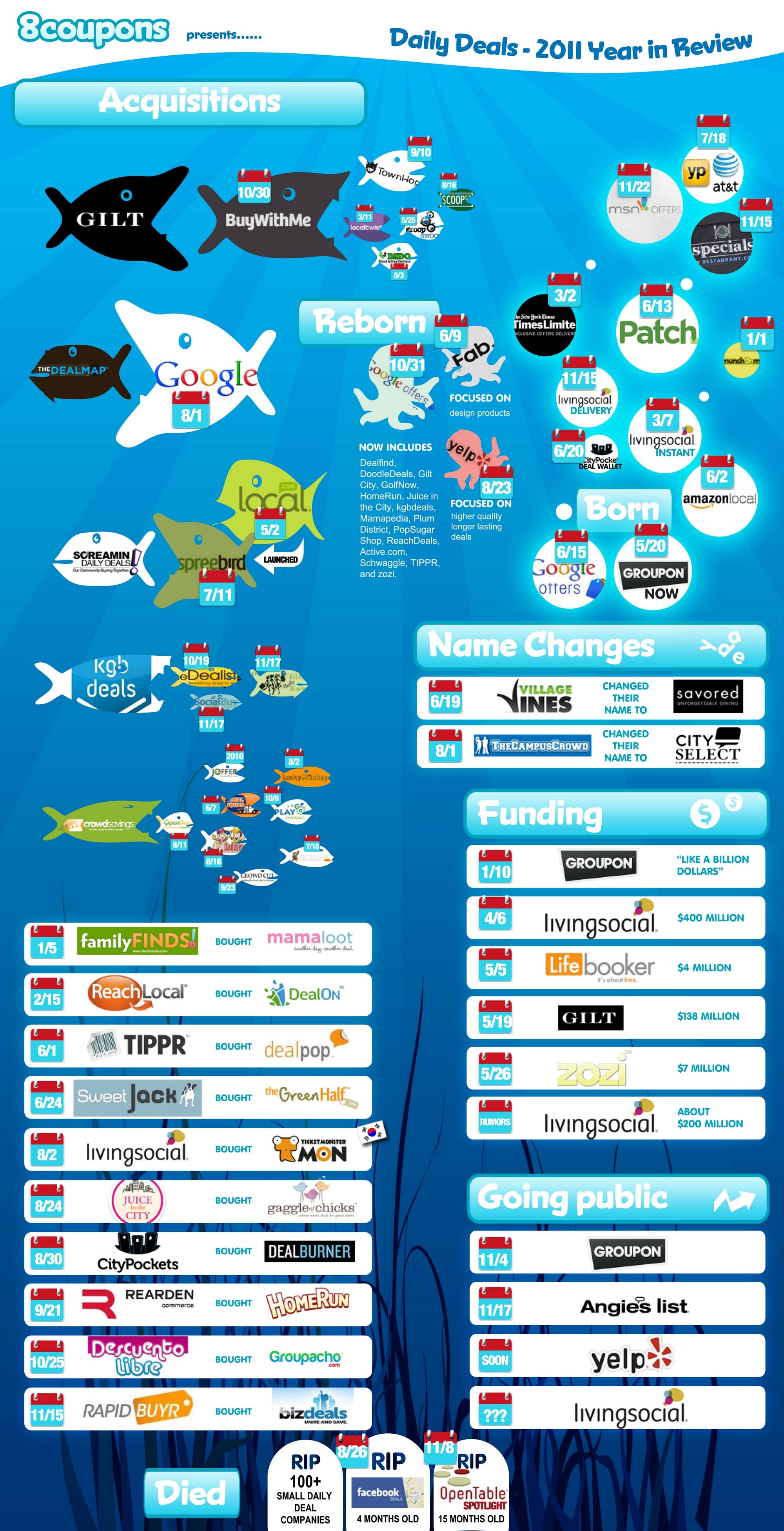 The site 8Coupons.com put together this fantastic infographic which gives us a look back at daily deal sites in 2011. From the acquisitions and those reborn, to name changes and those that died off. Facebook is among 3 that “Died”. 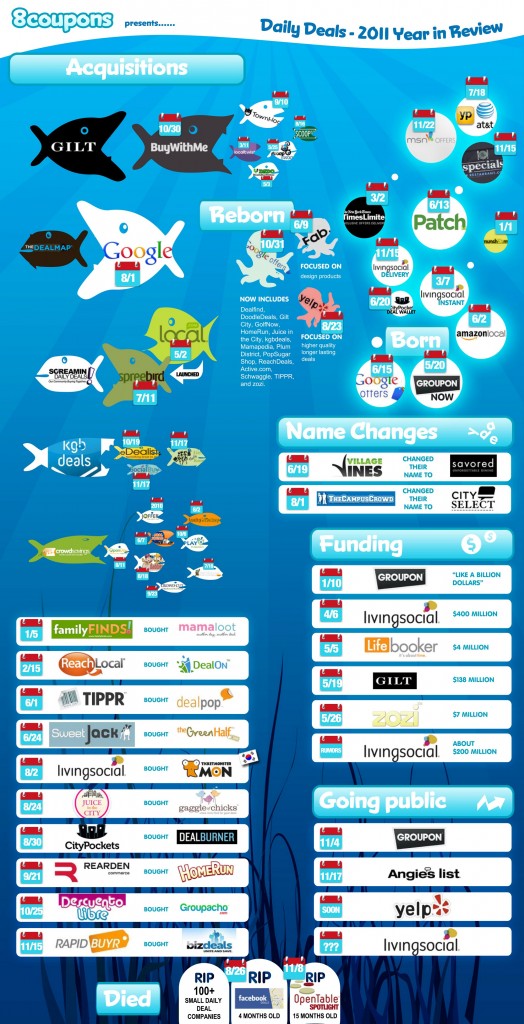 Groupon has been in the news lately for its funding, which the infographic says is “like a billion dollars”, or $950 million to be exact. Falling behind Groupon in funding, is Living Social, who raised $400 million.

It was back in August when Facebook announced the end of their daily deals after just four months of testing, which many said would open the doors for sites like Groupon. Whether Facebook got out because they didn’t see it as a viable business or because they just weren’t successful, is still up for debate.

Do you use a daily deal site and if so, which one(s)?

The rumors are true. Groupon and Foursquare have been in talks to form a partnership, Mashable has learned. Both U.S. and Canada can expect to start seeing daily deals in the explore tab of the Foursquare application. Chicago is the first city to see the Groupon real-time deals and location-based Groupon Now.

All U.S. and Canada Foursquare users can expect to see the Groupon deals along-side Foursquare roll out this Sunday.

This partnership is beneficial for both companies. Groupon will share an undisclosed amount of revenue with Foursquare, while gaining exposure and broadening their audience reach.

A company spokesperson says “Foursquare’s goal is to help people connect in the real world, discover new places, and save money through Specials and Deals. We’re excited that Groupon’s daily deals and real-time deals will now be included in our Deals platform”.

For those of you who use Foursquare, can you see this partnership adding value to the application?

Groupon and Pelago (creator of location-based program Whrrl) both posted on their blogs this week that Pelago has been acquired by the group buying site. 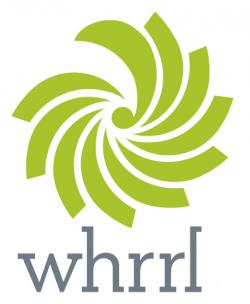 The most important aspect of this news is that Whrrl is being shut down by the end of the month. For good? Pelago explains:

We’ve made the decision to close the curtain on Whrrl for now. Think of it as the end of the first act of a long and complex play. You would be right to expect that the ideas underpinning Whrrl and many of the inventions contained within may reemerge under the Groupon banner.

What does that mean for existing Whrrl users? Well, if they log on they will now find the option to retrieve all their data, and “ultimately have the opportunity to use it again.” So, this bit encourages fans of the application that they will get to use the tool in some greater capacity, hopefully in the near future.

Whrrl has always been more than just “checking in”. They encourage users to give and receive recommendations about locations and activities via the service. Since Groupon is tied to locations and discounts, I can see how merging the two applications could lead to bigger and better things on both fronts.

What do you think of the acquisition? Are you a Whrrl user and wish it would stay active?

Groupon hasn’t been doing so well lately. We also saw backlash against the company after their less-than-tactful Super Bowl ads, but I’m not sure that’s why their numbers, according to reports, are down yet another 30%+ in March. Deal aggregator Yipit threw out some theories for the decrease in popularity:

Point one makes tons of sense – if you’re the first and only company doing something, you’re going to control the whole market. When competition starts popping up, no matter how good you are, your growth is going to slow down as people migrate to try other companies.

The third point also makes a lot of sense. Maybe Groupon targeted the wrong demographic from the start. Young users don’t have as much money (even for deals) and tend to have more focused interests (which don’t always align with the deals available).

But what I want to really examine is that second point. At first glance, it might not make a lot of sense. How could offering more deals be a bad thing, especially if they are personalized for the user’s interest (based on demographics and zip code)?

The same goes for your blog. Doesn’t offering more choices make the most sense?

While it might seem as though the answers are “Yes, yes yes!”, for many bloggers, the answers are actually “No, no, no!” Like Groupon, this could be one of the reasons you aren’t growing as fast as you’d like or even why you could see a decrease in traffic.

Let’s first think about post frequency. I blog for myself and for others, so I have a different perspective on this than many others might. When I first started blogging professionally, circa 2006ish, there was a big push for us to post as often as possible. I actually remember that one of my first clients (who paid based on traffic with a rev share model, rather than based on post count), held competitions for their bloggers – the people in the network who ended the month with the most posts got a bonus. Most of my clients still do want me to post as often as they can afford.

I think there’s an emphasis today on quality over quantity, but at the same time the decrease in quality is perhaps not the only reason it makes sense to post less often. First, by posting less often, you build anticipation. Let’s say that I write a blog you LOVE to read. If I only post once a week, you get excited for that post. If I post every day or multiple times per day, there’s no time for you to feel that anticipation. More importantly, though, people just don’t have time for it, no matter how awesome you are.

Think of it this way: If you open your inbox and there are ten notifications for new Groupon deals (or even ten links in a single email), are you going to have time to read them all? Even if they’re awesome, you might only check out the one that sounds the very best. On the other hand, if those notifications were sent once a day over ten days, you might check out all of them. Posts are the same way. If you want busy readers to check out all of them, posting ten times a day might not be best.

I see a lot of bloggers who have complete stores on their websites, either with their own products or with affiliate products. While you don’t want to eliminate potential sales by only offering a single product that isn’t relevant to most of your readers, it can be dangerous to offer too many products. People tend to get overwhelmed when they have too many choices, which leads to them not buying anything at all.

In addition, you have to consider your readers’ budgets (and their perceived budgets). If you release ten products over the course of a month, some of your readers might not be able to afford them all, and once you start them thinking that way, they start to wonder if they can afford anything. Or, because a lower-priced option is available, that’s what they buy, even though if it was the only one offered they would have shelled out the money for the higher-priced product. It’s a fine line to walk between too many offerings and not enough offerings, but I think finding this balance is important.

Links on Your Site

Too many choices are bad in general (for many blogs – as always, it depends on your niche). This applies to any kind of navigation system on your site – pages, categories, tags, even links within a post. Again, it’s about balance. If you don’t have any kind of navigation, it could make your site confusing and less useful to readers, but too many options can make your blog too overwhelming.

For example, let’s say you come to my blog and I have ten links within my 300-word post. If it’s a resource post (i.e., all about the links), that might make sense, but if I’m just linking to other categories on my site, other posts talking about the same topic, news stories, etc. it can be too much. Those links can get so distracting, that you might never finish my post over even come back to my site.

Or let’s say that you want to read more about me. If I have pages called About Me, About My Site, Contact, Social Networking, My Resume, Speaking Experience, As Seen On, 100 Things About Allison, My Story….well, as you can see, it can be confusing where to even start. It’s okay to have multiple pages, but keep things under control.

Will Groupon bounce back? I don’t think the company is going anywhere, and they’re still relatively young, so I think they’ll continue testing different things to see what works best. In general, the number of choices they give users is definitely something they should consider – and as a blogger, there are some lessons you can learn as well.