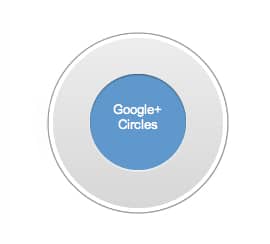 Yes, you read that correctly. One of the main draws to Google+ is their intuitive “circle” system of listing your friends together into groups. It’s a feature that I see people repeatedly saying is one of the best things about this new social media platform. And while I agree that at first glance, the Google+ circle system had me ooo’ing and ahhhh’ing just like everyone else, as I’ve started to use the system more and more, I’m not sold. Yes, I think the circles might even suck.

Okay, before all you loyal Google fans freak out…I said might. As in “maybe they suck.” Or at least, “maybe they suck for some people.” Google+ is so new that the jury is still out on this one. But let me at least tell you a little about my experiences and how I think the Google+ system is slightly…okay, really…flawed.

Let’s start at the very beginning.

One of the characteristics of Google+ that I really like is that you don’t have to be mutual friends to follow someone. Of course, everyone is able to control what anyone else sees, but if I like your blog and you have no idea who I am, I can still follow you and read whatever you decide to make public. You don’t have to follow me back. It’s very similar to Twitter in that respect, but with more levels of privacy. Awesome.

I like this because, frankly, I don’t like everyone who likes me. While that might sound harsh on a personal level, the fact of life is that you could be doing things that are really interesting to other people, but that doesn’t mean that other people are doing things that are really interesting to you – and that’s okay. I blog about blogging…and while that topic is relevant to Suzy who blogs about parenting and Donald who blogs about cars, I’m don’t have kids, nor do I care about my car beyond keeping it well maintained. So, Suzy and Donald can follow me, and I’m not pressured to clutter my stream with updates that are irrelevant. Awesome.

But Wait…Isn’t the Circle System Supposed to Cut Down on Clutter?

Yes. Yes, it is. But that doesn’t mean it’s working that way.

When I add someone to my circles, I break things down pretty well (at least, I think I do). Right now, I have a circle for my best friends in real life, so I can update them about plans for happy hour. I also have a circle for BlogWorld folk, so we can talk about behind the scenes plans if we wish, as well as circles for gamers (one of my main interests) and for social media professionals and bloggers. As more people join, I will probably break down those categories even more. But just because I’ve created a pretty well-planned circle system doesn’t mean that others have.

If Suzy the parenting blogger follows me, for example, she might not use circles as well as I do. Maybe she has people who blog lumped into one circle, for example, regardless of whether they blog about blogging or blog about parenting. Or maybe she puts me in a random circle called “people I met at BlogWorld” – which isn’t very relevant unless BlogWorld is going on or we’re talking about the event afterward. In other words, people do not necessary create circles based on the topics they talk about. People are more likely to organize their circles based on the streams they want to see, not what makes sense for updating. My needs for these two ways of organizing people are very different.

But all of that doesn’t really matter because of what I like to call the “public” problem.

Remember the first point I made, about how I like that you don’t have to be mutual friends? Well, the only way that really works is if people update publicly, at least occasionally. For bloggers, that’s not really much of a problem. If you’re looking at Google+ as a promotional tool, or even if you just use it as a way to gain ideas from like-minded people, allowing everyone to read your updates makes sense.

For example, earlier today, I talked about a project I was working on for bloggers. While it is relevant to my social media/blogging group most (and not, for example, my gamer friends), it might also be relevant to my followers that I’m not following…and it’s not sensitive information, so I want everyone to be able to see it.

The problem is, because I updated it to the general public, everyone saw it, even my gamer circle. It doesn’t matter if I pick Public and add other circles. The fact that I’ve chosen to make the update public means that everyone can see it.

And most of us bloggers what as much to be public as possible. Unless it contains information that is only relevant to everyone in a specific group (like plans for happy hour with local friends), it makes sense to connect with fans by making your updates public. If that’s the case though, if that’s how we use Google+, it really isn’t any different from using Twitter. You aren’t actually filtering anything for any circle.

I don’t like to complain about problems unless I can think of a solution…and while I’m not sure there are easy ones or even perfect ones, here’s what I think would work better than the current circle system:

The solution to the public problem is pretty easy. When you make something public, it should show up only for people who aren’t your mutual friends. They should be your default public group. If you want other groups to see it, you should have to pick public plus whatever circles are relevant. That would make Google+ so much better, with that one little change.

The second part of the solution, in my opinion, would be to have two levels of circles – private circles and public circles. Private circles would be sort-of what you see now – when you follow someone you add them to a circle to create different streams for yourself. It’s simply a way to organize your streams, similar to Twitter lists. I would actually like to see the option, like with Twitter, for you to make these lists known (if you want to) so that other people can follow everyone you have categorized a certain way. I find some of the best people on Twitter by browsing others’ lists.

This works for two reasons. First, it allows you to opt out when you don’t like specific content that’s showing up in your stream, but don’t want to stop following a person completely. I could sign up for Suzie’s public blogging circle, but avoid her public parenting circle, even though with the current system, she just updated everyone at once. To go along with that, some people are really clogging up my stream right now. I don’t want to miss some of their updates about specific topics, so I continue to follow them, but I wish I could mute them with other topics so I could more easily read updates in my streams.

Secondly, and perhaps even more importantly from a promotional tool standpoint, it allows you to show someone you’re interested when they might have otherwise assumed that you don’t care. For example, under the current system, I might add Suzie to my blogging circle, never realizing that she’s actually really interested in gaming as well. I’m missing out on potential conversation with Suzie because I don’t know everything about her. Or maybe one of my gamer friends is interested in starting a blog – they’d be potential fans of mine if only I hadn’t excluded them from my blog-related updates.

Again, my solutions might not be perfect, but I really do think that the circle system needs a little more thought. Right now, it is a good start, but I think one of the reasons I’m not completely loving Google+ yet is because it doesn’t offer me the level of control I really want…yet. It’s a step up from Facebook, to be sure, but I think it might still suck. At least a little, at least for right now.