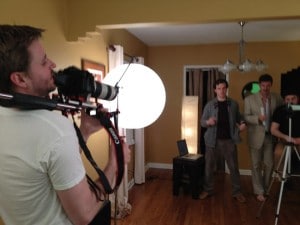 I had a blast making a web series with some of my good friends, and I think it turned out funny and not at all thought provoking, which is exactly what we were going for, so I’m happy about that. It’s called The Next Best Web Series, because it pokes fun at itself and at the process of making a web series.

1. Writing the scripts as you go

If you can avoid it, don’t write the scripts for the episodes as you go. In other words, don’t write one episode, organize the shoot, shoot it, edit the episode, and then decide to write another episode…and so on. This is fine if you’re just “shooting from the hip” so to speak, and you’re not sure if this is something you really want to do in your life, but if you made a conscious decision to shoot multiple episodes, or a full season, it’s much better to have all of the scripts ready to go, or at least half of them.

There are two main reason why this is the case:

Remember, you can always change the script easily, but changing an episode after it’s shot is what the actors and crew  call “something I don’t really want to do.”

If you’re writing a comedy, the story should be funny, and not just rely on the banter the characters have while going through the story. If the story is funny, then everything will fall into place around it, and this is never truer than with a web series, because everything needs to be staccato dialogue. If you really need a character to blast off, then make sure it’s worth it, and if you don’t have a lot of long winded speeches or long winded pointless dialogue, then these blast off moments will stick out in the way that they should.

At the end of our first season of The Next Best Web Series, I wrote three episodes with a very ridiculous premise that involved accidental drug taking, a lemonade stand, a bride-to-be, and a boy band. That might sound funny, and in another world we might have been able to make it work, but it was nowhere near the tone of our other episodes. So just because a scenario is funny, doesn’t mean it’s right for your show. One of the things about making a web series is you feel this freedom to do whatever you want with no restraints on content for the most part. That can really screw you over. Keep in mind, it’s not a sketch comedy show (unless it is) and there’s an ongoing story (unless there isn’t) that you should adhere to. The word “series” in web series suggests some kind of ongoing story line — otherwise it’s just another Youtube video. Oh, and back to the complicated, shocking scenes — your director won’t like it a whole lot, your actors will feel kind of uncomfortable, and you will likely not have the budget or the resources to pull it off. But, you know, details.

4. Many characters in one room all at once in almost every damn scene

Ok, this was not my fault at all. In my web series, I had a COLLECTION of great actors, and the collection grew as the season went on. They all killed their parts and were so ridiculously funny with each other that I found it hard or impossible to leave out anybody or skimp someone on their lines. Never mind when I brought in a couple guest stars who also happened to kill it.

With a web series, because of the nature of the format, you think in real time a lot, and not necessarily in TV time. In other words, you kind of want to get everything done in one room or location over the course of a few minutes, instead of cutting to multiple scenes, with maybe different combinations of characters in each, much like a sitcom would do.

It’s perfectly easy to do this, and it requires the planning ahead and writing the scripts in advance that I just did not do, but it’s also helpful for diving into each character more, which is what I really wish I was able to do. When you get all the characters in one scene, it’s just plain difficult to shoot and not always beneficial to the characters. Much like the stuff about long winded lines, they have their place when executed correctly and not overdone, and the chaos of having so many characters in one spot at one time will be funnier the less you use it.

5. Forcing the hand of the actor through detailed action

This I learned about in a backwards way. My director would often tell me to cut down on the length of the script, and for good reason. Since sometimes I was very in love with everything that I wrote, even though I would find out later that miraculously it wasn’t all golden nuggets, I would cheat and cut down on the action and scene description to reduce pages in the script. It worked brilliantly, except not in the way that I had intended. The scenes when shot were still too long, and the director was very much aware of this. However, with less detailed action for each actor, they somehow came up with their own action…almost as if they were also thinking about their character.

What came from this in my later episodes was a freedom for the actors to react, move, and emote in ways that I never began to think about, and it allowed the director to think freely as well. Obviously if there is something super specific, and it just has to be done, put it down in the script.

I am not an expert by any means, but simply gathered my own thoughts after going through the process. If you want to see what came of it, please check out the episodes for yourself. If you have any thoughts or follow-ups to your experience while producing a web series, please feel free to comment below or reach out to me on Twitter or Facebook.