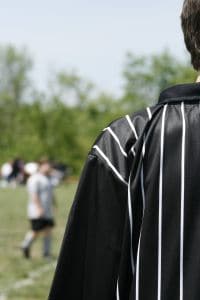 No matter what your niche, you’re always going to have community members who don’t agree with one another. Sometimes, it can get personal and nasty. I see this most often in forums, but if you don’t have forums on your website, you may see disputes popping up in your comments section, or even on social networking sites. Too often, bloggers are asked to serve as a community referee.

The trick is that you want to make all readers feel welcome and able to express their opinions while still diffusing a volatile situation. When two members (or groups) of a community are hashing it out, other members, especially new people who are coming to your site for the first time, may feel like outsiders. They don’t comment because they don’t want to be attacked or take sides in any way. Being a community ref is essential to building readership. Otherwise, you’re fostering a really negative atmosphere on your blog.

At the same time, too much moderation can also be a problem. If you delete comments or forum posts from your more vocal members, you run the risk of killing your community fairly quickly. No one wants to be part of a website where they can’t speak their mind. That’s part of what blogging is all about – interaction and opinion.

Keeping all of that in mind, here are a few tips you can use to successfully ref your community:

Luckily, most communities are pretty self-regulated. In the vast majority of niches, you don’t often have to act as a ref simply because communities won’t engage sometime who is antagonizing everyone else. If you need to, though, don’t back own. You’ll build a strong community by serving as a ref, not by ignoring the problem.