Want to see a great use of social media? Check out Cory Booker, who is the major of Newark, New Jersey. While other cities in the east were crippled by snow this weekend, he took to Twitter for a unique approach to snow response. Using social media, he was able to reach out to the people of the city, sending plows and salt trucks to streets that had been missed, helping to dig out disabled residents and senior citizens, and even delivering diapers to someone in need.

The snow? That was something was completely out of Booker’s control. Mistakes in the response were inevitable, as is often the case when businesses and bloggers deal with a problem. But because he listened to residents, not only was he able to correct problems, but he was able to keep almost everyone happy, even in a really crappy situation. What did he do right? 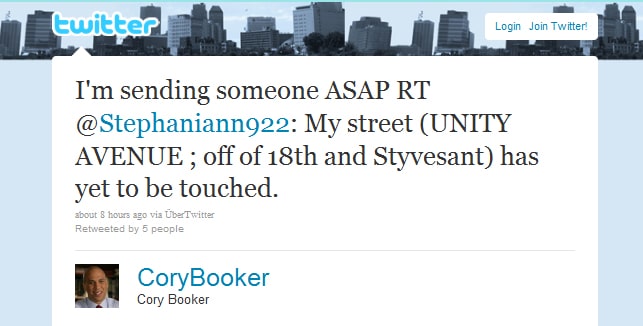 A lot of businesse owners and bloggers I see on Twitter talk. A lot. They tweet their links. They talk about their lives. They make announcements. A lot have learned to listen too. They gauge reactions to changes they make, and they respond to things their followers tweet. But a very small number actually respond to individuals. Listening benefits you, since you are able to make chances on your blog or with your products and connect with people, but responding means that you’re actually helping people with their problems. In my opinion, you need to talk, listen, and respond. 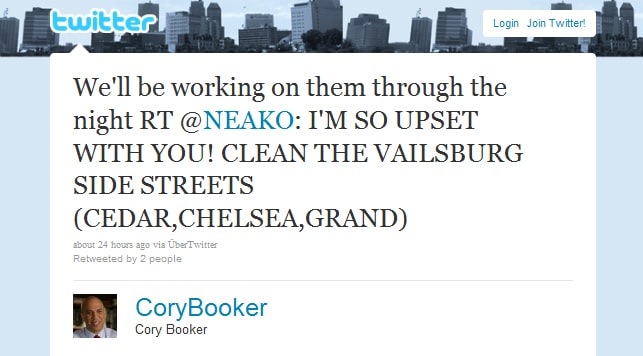 When there’s a major event going on, no one expects you to be perfect. They do expect you to try. If your audience or customer base is complaining about you on Twitter (or Facebook or whatever) and you are completely silent, it doesn’t matter what you’re doing to remedy the situation. All people remember is that they were angry and being kept in the dark. As a resident of NJ, let’s say you had to wait 24 hours for a snow plow. You’d be mad, right? What if you had to wait 24 hours, but during hour 2 of your wait, the mayor personally responded to your angry tweet and said when they were coming and that they were sorry it was taking so long? I don’t know about you, but I’d be less angry. The original Tweeter, @NEAKO, went on to sing Booker’s praises he responded and eventually showed up to help.

It’s a mistake if someone’s street gets missed, for example. Booker could have gotten defensive at people who were upset. It’s certainly true that mistakes are going to happen and the city was doing the best they could. But instead, he focused on fixing problems, not making excuses. If you mess up, apologize and correct mistakes. Making excuses in that kind of situation just pisses people off.

Like I said, people don’t like to be kept in the dark. If there’s a situation going on, don’t just respond to those having problems. Remember that for every person who speaks up, there are hundreds of people who are silent, but also unhappy. Give people as many updates as possible. If you’re working on the problem, people need to know that. Otherwise, it looks like you’re not doing anything and don’t care that people are mad.

Rather than pointing fingers of blame when things went wrong, he instead focused on thanking people who helped. Reading tweets like that would make me want to grab a shovel and chip in too if I was in Newark!

Thank you, Mayor Booker, for showing us how to use Twitter the right way! Best of luck in continue to deal with the snow!