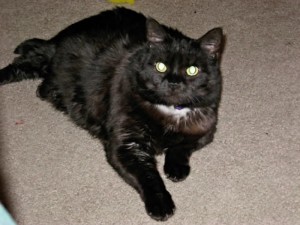 I have this incredible fat cat named Godiva. She’s my best friend in the the whole world – one of those animals who knows when something is wrong and firmly plants herself by your side when you’re upset. Today, I’d like to tell you the story of how I came about to own Godiva, and what it has to do with blogging fear.

After I graduated college, I moved to be near my then-boyfriend. We weren’t ready to move in together yet, so I got a small apartment of my own. As a full-time freelancer, I didn’t really have the chance to meet people at work, and when I moved to the area, I didn’t know anyone except my boyfriend.

In other words, I was lonely.

So I decided that getting a pet was the right way to go. My one aunt is well-known for connecting pets with new owners, so told her I was on the lookout for a kitten in case she heard of any animals in need. A few days later, she called me back.

That was Godiva’s name at the time. It was something to so with Pokemon or Yu-gi-oh or some other cartoon my little cousin was really into at that time. But I digress. She was my aunt’s cat, and Kyba/Godiva was about three years old. I wanted a kitten, so I wasn’t sure. After all, if she was such a great pet, why would my aunt be getting rid of her?

My aunt is an animal person. My uncle…not so much. He likes animals, but certainly not sleeping on his bed at night. He allowed my aunt to keep cats and dogs (at one point she had five cats and a dog! She’s now down to one each, I think), but on one condition – they ate, slept, and pooped in the basement. No kitty litter boxes upstairs, in other words. It was a way to keep the mess contained.

They installed a kitty door in the door that led to their basement so that the cats could use the litter box throughout the day, but still be upstairs among people, too. At night, the kitty door would be latched, and they’d sleep in the basement. It worked fine…until Godiva started to gain weight. With so many cats, my aunt just let a plate of food out at all times, and Godiva would sit there and eat much more than her fair share. She’s what you call hefty.

And one day, she got stuck in the kitty door. END_OF_DOCUMENT_TOKEN_TO_BE_REPLACED