Last week Rebecca Black was an unknown. This week she’s had over 10 million views of her YouTube video for her song, Friday.

The problem is … the reviews are not all positive. In fact, you’d be hard pressed to find any positive reviews. But the video has blown up across all social media veins – Facebook, Twitter, Google Trends, and YouTube. It went from 4000 views last Friday, to 2 million views on Monday, to nearly 10 million today.

How did that happen? Well, part of the rise may spring from Michael J. Nelson, who tweeted a backhanded compliment (and a link) last week. He wrote, “Let this be on your lips as you head into the weekend (it also answer the ? “what’s the worst video ever made?”)” Other networks, including Comedy Central, began talking about the video – watching it spiral out of control and onto iTunes.

Which begs the question – does it matter if you go viral for the wrong reasons? For Rebecca? Perhaps. But for Ark Music Factory (the company that launched the video), I’d guess it doesn’t matter to them at all! Because users who watch the video are very likely to click on their other videos … maybe to see if they’re all bad, or maybe to see if there’s a diamond in the rough. And it’s all exposure for them. Especially now that parodies are creeping out of the wood-work. 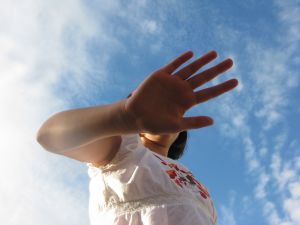 Earlier this month, Nikki made the excellent point that we should all be including more video blogs – or vlogs – as part of our monthly posts. While it is true that vlogging can help you connect with the reader, I’m sure I’m not alone when I say that vlogging still makes me a little…itchy. I’m just not 100% comfortable in front of a camera yet, and even though I’m pushing myself to be more and more outgoing, vlogging is tough for me.

Yet, I love making videos.

I find that not only are videos fun for the reader, but they get my creative juices flowing, stretching my innovation muscles in ways that traditional writing doesn’t do it for me anymore. I love all aspects of direction, editing, and producing videos, and I have since I was in high school. I’m just not a fan of being the star.

So what’s a girl to do? How can I vlog more often, even though I’m still shy in front of the camera? The answer is easier than you may think: Don’t be in the video.

Yeah, right. How could that possibly work? I know, I know, that’s what you must be thinking. But oddly enough, with a good starting concept, you don’t have to be the person speaking to the camera to create an awesome vlog for your website.

Point in case: This past weekend, as I’ve mentioned before, I was at a gaming conference, and while there, I did some freelance work for video game website Spawn Kill. As part of my post for that site, I created a video called What Is MAGFest, which I fully intended to actually be in…before I got sick and totally lost my voice. The content was getting less and less fresh each day that I was sitting on the project, waiting to feel better, so I decided to roll with it. I used the clips I had, created some transitional message slides, and finished the piece, all without being on camera for a single second. Take a moment to watch the video and you’ll see what I mean:

This isn’t the first time I’ve created awesome video content for a website without being in the video at all. In fact, after BlogWorld Expo 2010, I created a video from the conference that didn’t have me in it at all:

I’ve done other such videos for various websites, all fairly well-received by my readers, none with me in them. What did all of these videos have in common though?

Of course, this type of video typically includes many small pieces and not only takes a long time to film, but a very long time to piece together. Not counting filming or uploading at all, the MAGFest video, which was less than five minutes long, probably took about four hours to create. If you simply record yourself speaking to the camera, it takes a lot less time to create a vlog.

The bottom line? Don’t let your shy nature stop you from vlogging. With some creativity, you can create video content even if you don’t want to be in the actual video.