We hope you joined us at our New York and/or Los Angeles events in 2011, and if you did – you helped us break our previous attendance records! Between the two shows, BlogWorld hosted more than 4,750 attendees and 335,000 online viewers. 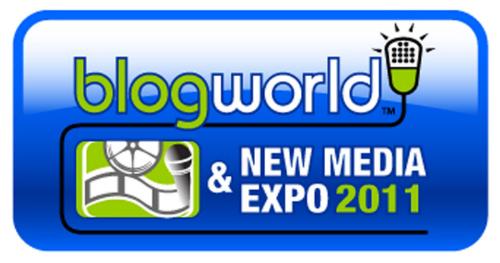 “BlogWorld West in Los Angeles was our most successful show to date in terms of attendance numbers, exhibitors and sponsors, the caliber of the educational sessions and the speakers we hosted,” said Rick Calvert, CEO and co-founder of BlogWorld & New Media Expo. “The decision to take BlogWorld bi-coastal has broadened our reach and made the event more accessible to attendees all over the country and the world. We are looking forward to continuing this pattern of growth into 2012 and have some exciting news to announce in the coming months.”

BlogWorld co-founder Rick Calvert spoke with San Diego Magazine about coming up with the idea for BlogWorld, how it has grown, and his wish for the conference to eventually have a place in San Diego.

“I think we are both high tech and casual and laid back: We are the high-tech city you want to live in.” 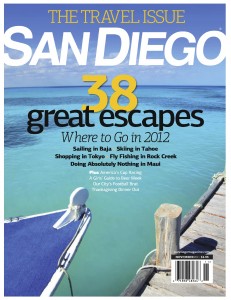 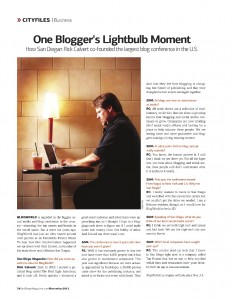 If you picked up the September, 2011 issue of Inc. Magazine, you may have just seen BlogWorld featured on page 14! (If you haven’t, read on, or go snag a copy today).

Our very own Rick Calvert and Dave Cynkin are featured in the Spotlight on Social Media section. Rick talked with INC about how BlogWorld has changed over the past four years, whether or not you should outsource your social media content, and how social media and blogging are continuing to evolve. (Click to enlarge) 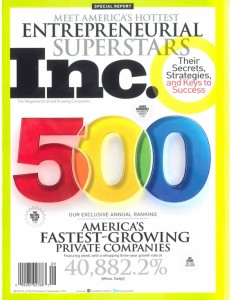 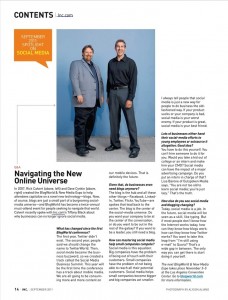 My favorite quote (on whether you should hand off your social media efforts to someone young or do it yourself):

You have to do this yourself. You can’t hire someone to do it for you. Would you take a kid out of college or an intern and make him your CMO? Social media can have the impact of a major advertising campaign. Do you put an intern in charge of that? Lisa Barone of Outspoken Media says, “You are not too old to learn social media; you’re just lazy.” That’s the truth. 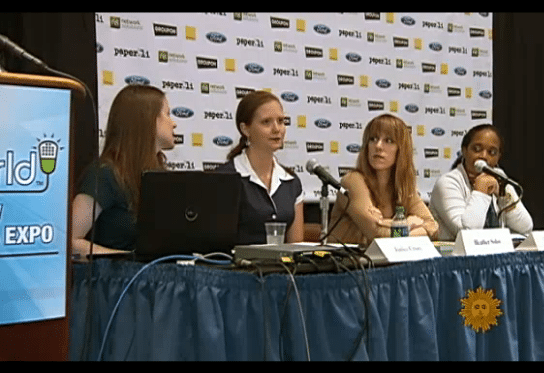 You may have noticed a few camera crews roaming around the expo floor at BlogWorld NY and interviewing some of our bloggers. That was CBS Sunday Morning producing a segment about blogging from our conference.

We’re excited to share the segment here with you – featuring interviews with bloggers, Srinivas Rao, Dave Ursillo and Danielle Liss.

CBS also included one of our conference sessions, “How to Make Real Money From Your Blog” led by Janice Croze, Jennifer James, Wendy Piersall and Heather Solos. 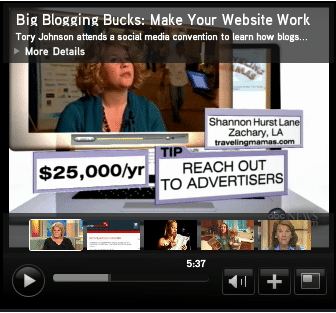 Did you miss it? No worries, you can catch the video on ABC’s website and read Tory’s article here.

Tory visited BlogWorld at Mandalay Bay Convention Center to learn firsthand about the buzz surrounding the event. She spoke with dozens of bloggers, new media experts, and exhibitors about how blogging and social media plays a role in their lives and today’s world. She also explored the topic of monetization, gathering advice and information on the latest technologies from exhibitors at the event.