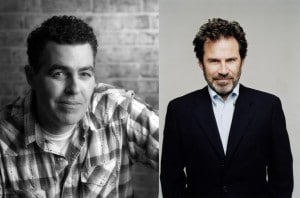 In the episode entitled “Welcome,” Dennis explains how he got his start in comedy, while Adam discusses being a dad to twins.

As a podcaster, what really appealed to me was hearing Dennis and Adam talk about the format of podcasting. Dennis revealed, “I talked to Larry Miller and asked him what it’s like and he said, You have to go in and know that you can’t map it all out and just start having a conversation. Then it clicks in that you don’t have to have everything all mapped out, and you’ll find it amazingly cathartic. This feels like what I use to pay a shrink $300 an hour for – except we’re getting paid.”

Look for both Adam Carolla and Dennis Miller at NMX. Adam is participating in a keynote with Podcast One’s Norm Pattiz, while Dennis is co-hosting the 10th Annual Podcast Awards with Emily Morse.

As podcasting gets hotter and hotter, you want to jump in as soon as you can, and get going in the right direction. We have assembled the best presenters with the best subjects to help you launch your own podcast.