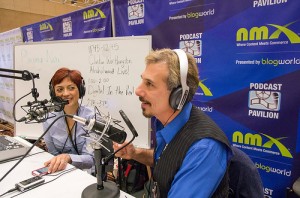 The 10th Annual Podcast Awards are being held in Las Vegas at New Media Expo.  Each year podcast audiences nominate and vote for their favorite shows. Both the nominating and voting are done over a period of time. Multiple days of nominations and voting means a podcaster with a small engaged audience can have just as many votes as a show with a large audience (but little engagement). It’s not about downloads – it’s about connection, engagement, and influence.

If you look at the past winners of the People’s Choice award, you will see a the Fantasy Football podcast (from ESPN) taking home the prize.Keith and the Girl (a comedy podcast started in their apartment) took home the award in 2007.

Here is a quick overview how your show can be nominated:

There will be approximately a 10-14 day period in which New Media Expo will review all of the nominations. The review process will include the following:

Nominations are open from January 19th through February 2nd.

The top 10 finalists in each category will be announced on February 23rd.

Once the top 10 nominees in each category are selected by the review committee and added to the website, the final voting will commence.

Voting will be open for 15 days ending on March 10th. Every member of the audience can vote once a day. A verification e-mail with a clickable link will be e-mailed to you so that you will have to verify the vote.

Click here for full details on the rules and regulations.