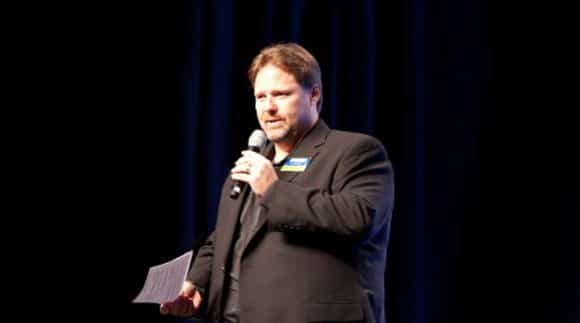 Did you see the amazing news about where NMX will be next year? I am beyond excited! That’s why I’m giving you something very special this week. (But you have to read this blog post to find out what it is…)

It’s been a dream of mine to hold our event in conjunction with NAB Show (National Association of Broadcasters) since I first launched BlogWorld & New Media Expo in 2006.

We have all been through a lot over the past eight years. Twitter didn’t exist when we first announced BlogWorld & New Media Expo. Facebook didn’t overtake Myspace as the biggest social network until 2008! Of course Pinterest, Instagram, Google + and Vine didn’t come into being until much later.

Do you remember how often blogs were in the news back in 2006?

It seemed like every time you turned on the radio or the TV, every time you opened a newspaper (remember them?) or a magazine there was a story on blogs…how they were taking over the world, how they had no credibility and were just hobbies for people in their pajamas.  Blogs had already impacted two presidential elections by then.

I first started thinking about launching a blogging event in 2005. Really I just wanted to go to it and no matter how hard I looked I couldn’t find it.  So I started researching. What would this event look like? Who would go to it? Was I the only crazy person who wanted such a thing?

You know that’s not true, or at least you were just as crazy as I was. Funny enough, a friend of mine, Tim Bourquin, and his brother Emile had a similar idea about a year earlier. It was called Podcast & Portable Media Expo.  (I will tell you the rest of that story another time.)

But while I was doing some research, I realized this was so much bigger than a blogging event! It had to include podcasting and video and all things social media. We didn’t call it Web TV yet. Heck, YouTube was only launched in 2005!

So we decided to call it BlogWorld & New Media Expo, always knowing we would change the name one day.

Now, as you know, we are just called #NMX.

This whole co-location with @NABShow has me feeling very nostalgic. There have been a lot of historic moments in our short eight years. Like back in 2007 getting WordPress founder Matt Mullenweg to give our opening Keynote. And then getting Mark Cuban billionaire owner of the Dallas Mavericks and blogger to give the closing Keynote.

The last few years, Podcasting has exploded at @NMX as I always knew it would.  In April 2015 we will host the 10th annual podcasting awards.  It’s hard to believe it has been 10 years! A special shout out of recognition to Todd Cochrane @GeekNews for keeping the podcast awards alive all these years.

Web TV and internet video is right around the corner. We hosted the IAWTV Awards this year and next year it is going to be HUGE!!

We, you, me, everyone involved in this media revolution have been a part of history these last few years. We weren’t just watching from the sidelines, we have been actively participating in it.

That is why the timing was so right for this co-location with @NABShow.

Our NMX tribe needs to rub shoulders with the @NABshow community and see all the companies that come out to showcase their gear, gadgets and technology that traditional media is using.

There were 93,000 people at NAB Show this past April!! Any company there that had anything to do with New Media was buzzing in Vegas.

New Media Expo had a long title in the beginning to describe our community and what we were all about, to bring us all together in one gathering place to share ideas, showcase the latest tools, and network with our peers…people who were just as crazy as we were and who saw this media revolution coming long before others did.

Our mission in life; my mission in life for the last eight years has been to celebrate everything that is great in the blogging, podcasting and web TV world together with you. To help each other succeed in this amazing media revolution.

Just as our show name got shorter over the years, as more and more people became familiar with the social media industry, the same thing will happen with the New Media and Social Media labels. Soon, it will simply be referred to as “Media”.  In fact @LeoLaporte has been saying that for years now, several times from stage at NMX and Podcast Expo.

Bottom line – we need one another to grow and get better in the Media space.  That’s why I want to give you the biggest event to EVER take place in the New Media space. This is the event that will now have everyone simply calling it “Media”.

We are about to make history again. And I want you there with me when it happens.

2015 will be the year everyone in History will refer to as when the Media Revolution hit the tipping point for the entire world.

In order to make April 2015 the biggest event to date, I want to give my NMX subscriber family a very special, early bird discount this week, as we open our doors to begin accepting registration.

This will give you first dibs to lock up VIP tickets that will sell out as we begin advertising all over social media. It will also give you the lowest ticket prices available to the public.

Here are the Specifics:

We are now officially open for early bird registration for those who know they must be at this historic event.

Register right now and lock in these special early bird rates before they’re gone for good!

Oh! And remember when I said I have a special gift for you today? (Sorry, this is only for NMX newsletter subscribers. You can get my special discount code when you subscribe here.)

Thank you from the bottom of my heart for all of your support and for being a part of history.