We have heard those questions so many times the last couple of months. I apologize for keeping you waiting so long to hear the answers.

Two hours ago I got an email I had been waiting on for eight years. Since I first had the idea to launch New Media Expo I knew that for new media content creators to get the recognition, respect, credibility and compensation they deserved they had to go into the lion’s den and stand shoulder to shoulder with traditional media broadcasters as equals.

I am extremely proud to share this news with you…..

April 13 – 16, 2015 New Media Expo will be co-located with the NAB Show at the Las Vegas Convention Center and Westgate Resort.

You may have heard me call NMX the NAB Show of the future. Just in case you haven’t, let me explain. NAB stands for National Association of Broadcasters. This is the annual tradeshow and conference where TV and radio broadcasters, film makers and marketers who create audio and video come to every year. It is the place where the latest technologies, tools and strategies are shared. Last year 93,000 electronic media professionals came to the NAB Show!!

However there has been something missing from the NAB Show…… US!!

They have no idea what is about to hit them. 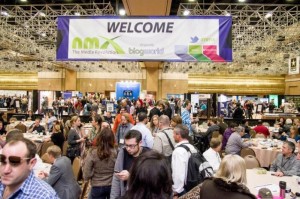 Don’t get me wrong, there has been something missing at NMX as well…. Them!! We need traditional media to embrace us as brothers and sisters. We need them to join our revolution! We need to stop calling each other us and them. We can teach traditional media professionals so much, but we have so much to learn ourselves.

I promise you if you join me at NMX and NAB Show next April 13 – 16 it will open your eyes to what the New Media Revolution can be. You will see what I have been dreaming about, some would say preaching about, and working tirelessly towards for the last eight years.

Web TV creators want to see the latest cameras, mics, video editing software, CDN networks, lighting, booms, tri-pods, cables and every other imaginable tool you can think of to make their content better when they come to NMX.

Bloggers want to network with potential partners and sponsors from the biggest media companies and brands in the world when they come to NMX.

You will find all of that and so much more when you come to NMX April 2015.

We will revolutionize the NAB Show and take The Media Revolution to an entirely new level.

I am more excited than I can possibly explain.

THANK YOU to each and every one of you for everything you have done to bring us to this moment in time. Now the real work begins.

A couple of you have already pointed out that I failed to mention the location in my post a few minutes ago. Our exhibits will be in the north hall of the Las Vegas Convention Center (LVCC)  alongside NAB Show. The conference sessions will be at the Westgate Resort right across the street.

I should also add, the NAB Show takes up the entire LVCC with more than two million square feet of exhibit space. To put that in perspective you are looking at more than 1,000 exhibiting companies. Some of the booths are as big as the entire NMX exhibit floor.