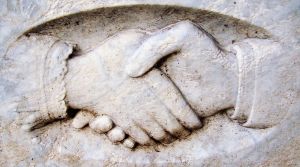 You know your  blog would take off if only Joe Schmoe the a-list blogger in your niche would have the good sense to read it and promote it. You just know it. It’s time to build that relationship. You’re going to be a rock star. You can feel it in your bones.

I hesitate to say that most people suck at building relationships online, but some days it sure feels like that, doesn’t it?

Building relationships is the key to blogging success, in my humble opinion, so if you don’t have this skill, you’re at a huge disadvantage. Let’s take a look at all the ways people are doing it wrong:

Mistake #1: Not Introducing Yourself

Several years ago, I wrote a post called, “Scott Stratten Doesn’t Know Who You Are,” which is filled with advice that I still stand behind today. The thesis was that you shouldn’t expect a-listers to just magically find your blog. If you want someone to know who you are, you have to say hello. You have to put in that work to build the initial relationship, and you have to be memorable.

We’re building a great relationship with some funny banter on Twitter and then…poof…I don’t hear from you for three months. In that time, I won’t forget you, but our relationship certainly isn’t improving. I know it can be a challenge to keep up with everything and everyone, but I suggest making a list of 100 or so people and putting in the effort to continuously build your relationships with them on a weekly if not daily basis.

There are few things worse than someone blowing smoke up your rear. Don’t flatter someone because you want to build a relationship. The best relationships are build on honesty and constructive comments. That doesn’t mean that the first contact you have with an a-lister out of the gate should be criticism (no matter how constructive), but gushing over someone’s work can come off as really fake.

Mistake #5: Building a Friendship of Convenience

Some people only contact me when they need help. It’s not even a tit-for-tat thing, which would almost be better, because at least I get something out of the deal! When you build a relationship with someone online, it’s okay to ask for help when you need it, but if you take, take, take without ever giving, people are not going to be inclined to help you.

Mistake #6: Thinking You’re a Bigger Deal than You Really Are

The “don’t you know who I am” mindset is really unattractive. No, I don’t know who you are, no matter how big your audience is. If you want to build a relationship with someone, be humble. Assume they’ve never heard of you, and if they have, it should be a pleasant surprise. Even if you are a big deal online, that kind of attitude makes it seem like you think you’re better than the other person. When building a relationship, always make the other person feel like the most important person in the room.

Mistake #7: Demanding Too Much Time

We’re all strapped for time. If you want to build a relationship with an a-lister, realize that they can’t spend three hours every day replying to your emails, tweets, Facebook messages, and phone calls. Be respectful of their time, and always say thank you for any advice or help they give you. Believe it or not, “thank you” is a phrase that never goes out of style (and is waaaaay too uncommon online).

What mistakes do you see people making when it comes to building relationships online?