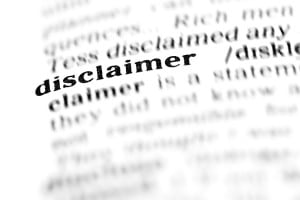 My tweets do not represent the opinion of my employer.

Is it just me, or is this the most ridiculous statement ever? Every time I see it, I get twitchy. Because it anything, you’re making things worse.

People think that this disclaimer justifies bad behavior on Twitter. Or rather, not bad per se, but behavior not in line with their employer’s brand. They curse, make lewd comments, start drama, or otherwise act in controversial ways, then they point to their disclaimer and say, “But it’s okay, because this is me and I’m not representing a brand right now.”

Why is this ridiculous?

Let’s say you see someone out at the bar, getting wasted, hitting on everything with a pulse, and yelling racial slurs in a drunken stupor. Then, the next day, you see that same person working at Disney World. You’d probably be pretty disgusted that a company like Disney would work with someone like that.

Would it make a difference if, the night before at the bar, the person was wearing a shirt with “Anything I’m doing right now doesn’t represent my employer, Disney!” printed on it? Absolutely not. If anything, it draws attention to the juxtaposition between the idiot behavior and the family-friendly employee.

Here’s the thing: anything you do or say online represents your employer, whether you post a disclaimer or not.

If you want to publicly post pictures of you doing shots at the bar, make sure that it isn’t going to hurt your employer’s brand. Some companies are more family-friendly than others. If your personality doesn’t fit well with your company’s brand, it is probably time to start looking for a new job.

So stop it with the disclaimers. They don’t mean anything. Just act responsibly online, and don’t write anything on Twitter that you wouldn’t send to your boss directly.