At NMX 2014, we’ll be presenting several Super Sessions, which are longer and more in-depth sessions to kick off our Blogging, Podcasting, Web TV, and Business Tracks every day. Today’s Super Session Spotlight is all about Pat Flynn, who will be presenting “How to Convert Your Casual Readers into a Thriving Community of Raving Fans” in the Blogging Track on Day One. 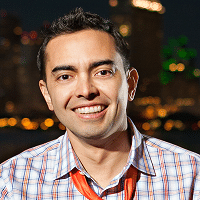 In the world of blogging, few people work harder than Pat Flynn. I say this not to give him a pat on the back (haha, “pat” on the back – I crack myself up), though he definitely deserves it. I think it’s important to know that the backbone of his success is the hard work.

We’re proud to be welcoming Pat back to the NMX stage, this time to present the Super Session “How to Convert Your Casual Readers into a Thriving Community of Raving Fans.” Get your ticket to the show here if you haven’t already!

If you want a taste of what you can expect from Pat at NMX, look no farther than Smart Passive Income. Specifically, here are some of my favorite resources, pages, and posts from his site:

Something else I’d like to point you to is Pat’s most recent ebook, Let Go, which has over 200 five-star reviews on Amazon. (And for those of you without a Kindle, you can also purchase the book for your Nook or via Snippet (which allows you to view on your i-Devices).

Why are we bringing Pat to NMX for a Super Session? Three main reasons:

Pat doesn’t preach ideas he doesn’t use himself. He tests his theories, posts his results, and encourages you to do the same. He isn’t slinging BS or promising readers that they’ll “get rich quick” if only they purchase his new $97 report, which is filled with outdated advice that you can read anywhere. He tries new techniques constantly and even talks about his mistakes.

2. His tips work across all niches.

Often, I see marketing bloggers talking about ways to make money online that are only really relevant if you have a blog about ways to make money online. It’s a vicious cycle. But Pat is actually a niche blogger. Yes, he has Smart Passive Income, but what you may not know is that he got his start with a niche site about the LEED test in the architecture industry. He also has a security guard training site, a site for people who want to create clickable maps, and a food truck site.

Pat has spoken at NMX in the past and has also spoken at other conferences. His sessions are among the highest-rated wherever he goes. It isn’t just because he is charismatic. Pat also prepared like crazy for his session, putting dozens of hours of work into a single one-hour speaking gig, including research, content creation, practice, and more. He’s also super approachable, so if you have a question after his session, even if you don’t get a chance to ask at the mic, you can ask at a networking party or if you see him in the halls.

I hope to see you all at Pat’s Super Session, “How to Convert Your Casual Readers into a Thriving Community of Raving Fans” at NMX 2014. If you don’t already have a ticket, make sure to secure your seat here! And get there early – I suspect that Pat’s session will be standing room only, even if we give him the biggest room available! Oh and just in case you don’t make it to Pat’s Super Session? Don’t worry – he’s speaking in Podcasting Track too!