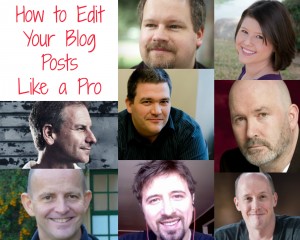 Want to increase the quality of your blog posts significantly? Hire an editor. I don’t mean a proofreader who’s going to pick out your typos. I mean a real editor who will use their pen like a razor blade to cut your rough posts until what is left is a shining gem.

If you don’t have the means for that, though, all is not lost. Yes, you can self-edit. It isn’t easy, but it is possible.

I spoke to several NMX speakers who shared some favorite tips for editing blog posts:

In our own minds, the purpose of a post usually seems extremely clear. But if your post’s content isn’t organized well, it can be easy to lose sight of your ultimate goal with the piece. By improving your flow, you can carry your readers through the post so they better understand what you’re trying to say.

Here’s a great technique for improving your flow from Ric Dragon of DragonSearch:

If you feel your ideas are lacking a cohesive narrative, here’s a trick that can help you create a better flow of ideas: take a few paragraphs, their sentences, even phrases, and convert them into a bulleted lists. This is only for your own review – the idea here isn’t to actually publish your paragraph as a bulleted list!

Start by making the first sentence the main bulleted point. Then with each main idea, create a sub-bullet. In this following example, I’ve taken a paragraph from Malcolm Gladwell:

“In 1969, Ted Turner wanted to buy a television station. He was thirty years old. He had inherited a billboard business from his father, which was doing well. But he was bored, and television seemed exciting. “He knew absolutely nothing about it,” one of Turner’s many biographers, Christian Williams, writes in “Lead, Follow or Get Out of the Way”. “It would be fun to risk everything he had built, scare the hell out of everybody, and get back in the front seat of the roller coaster.”

Now, let’s break down the flow of thoughts:

You can see how each of Gladwell’s paragraphs extends the story, and carries the reader from one thought to another. In contrast to that, a paragraph that lacks narrative flow may have disjointed sentences that don’t follow one another. By bulleting your own work for a bit, you can see where you might be adding thoughts that are out of the flow, and improve your own writing quickly.

To Write Well, You Have to Cut

One of my personal best editing tips is to always try to cut your post down. What can you cut out and still get your point across? All writers are guilty of using too many words.

You can’t be afraid to cut your posts. Writes Chris Ducker (who will be presenting a super session at NMX), “My blog post editing ‘system’ is a simple one. I write and write and write until I feel as if I’ve covered everything I need to, to be able to get my point across and provide as much value as possible. Then I’ll go back and remove any unnecessary words, examples, etc. Finishing off with a spell check and some initial layout (usually just subtitles). This equates to around 20-30% of the original article being cut, and the final product being as polished as possible.”

Before publishing, it helps to give your post one final look the next day. I like to let posts marinate a bit (at least 24 hours, but more if possible), and then do a final review. One of the best ways to do this is to read your post out loud.

This was actually one of the most common tips given to me when I polled NMX speakers, such as Gary Bembridge, who writes, “Sleep on the post and then the next day read it aloud to yourself. You will be surprised at the issues you pick up and how easy it is to improve the flow and messaging as your brain has been quietly editing and improving your post overnight.”

Dino Dogan agrees, writing, “My best editing tip is to wait, don’t hit the publish button. Come back in few hours and re-read what you wrote. As you’re re-reading your content, ask yourself these questions. Can it be said more clearly? Can it be shorter? Can I be more specific? Does it tell a story? And if you’re proofreading, try reading your content backwards word by word. It’s an old trick journalists use to check for typos. It works.”

Writes Rich Brooks, “I read my blog post–especially the beginning and the wrap up–out loud. I strive to have my blog posts sound like the way I speak in real life, so if it doesn’t sound like me, I know I need a rewrite. The beginning and end are most important to me because they help pull in a reader, and get them to take action, respectively.”

Aaron Hockley, who will presenting a workshop at NMX agrees, writing, “My biggest editing tip is to read the article out loud.  You’ll often pick up on misspellings, odd sentence flow, and other issues by articulating verbally that which you’ve previously written.  Our eyes and brains can skip past a written problem several times but when we engage a different part of the brain, the issue might become more visible.”

And I think Kristin Hines, creator of the course Blog Post Promotion, sums it up well, writing, “As a freelance writer and blogger, I have found that it’s easy to miss those things that spell check doesn’t catch after you’ve stared at a blog post for hours on end. Therefore, I have two options for editing – taking a few days away from the post and revisiting it with fresh eyes, or having someone else edit it. It’s the only want to make sure those “oopses” are taken care of come publishing time.”

Do You Need to Edit at All?

Finally, I think it’s important to note that some people over-edit. Sometimes, too much editing can cause you to strip you out of the post. So, I’ll leave you with a final thought, from C.C. Chapman:

“I’d say not to edit at all. Hearing your authentic voice even with the background noise and interruptions makes it more authentic. People will come to appreciate it.”

What is your best tip for blog post editing?