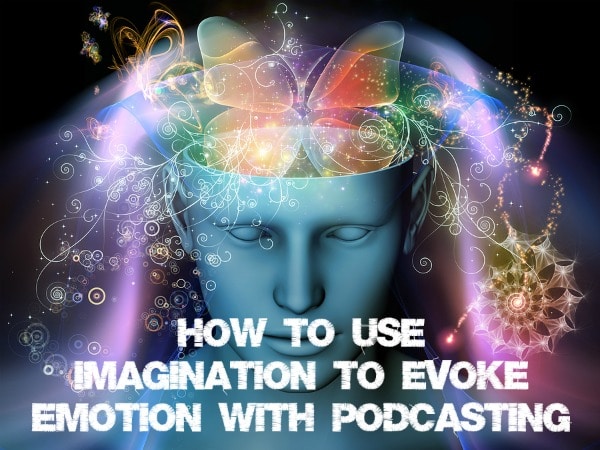 Envision your podcast having an audience of 300,000 people a month. You are receiving so many requests for speaking engagements that need to hire someone who will simply manage your appearances. Your listeners are encouraging you to write yet another book on your subject. All of the big names in your industry know your podcast is the show on which to appear if they hope to get noticed.

It is all possible for you.

When I get you to envision the future in your imagination, I stir emotion. I give you hope. The story creates excitement. It is inspiring. Emotions are powerful.

Audio in general is so much more emotional than video. You can be so much more powerful if you use audio correctly, because audio uses the power of the imagination to evoke emotions deep within the listener.

The Emotional Difference Between Audio and Video

Video is exactly what you see. When you and I watch video, we both see the exact same thing. There is no doubt about the color of a car in the scene. The weather is perfectly obvious. Your view of the surroundings is exactly like my perception. Every part of the scene is determined by the director.

When you and I hear audio, most of the details are left up to our imagination. We hear a story and envision the details in our head. When you see the scene in your imagination, you create it in a way that gives you the most joy and benefit. I do the same. Our two visions may be very different.

The storyteller may describe part of the scene, such as a back alley on a cool, damp night. If we saw that alley on video, you and I would see it exactly the same. If we hear about that alley, we envision the alley in very different ways.

You may picture a very tight, dirty alley where the buildings are very tall. They alley is one car wide and strewn with dumpsters. The back doors of restaurants rhythmically line the walls of the buildings, like soldiers standing at attention. One street light hangs off a build halfway down the alley. The stench of old food fills the air.

I might imagine that alley as a dirt path through a neighborhood between houses. Chain link fences lines the alley on both sides. As cars make their way down that alley, they are forced to dodge trashcans from the houses that have been set out for trash collection the next morning. The trail goes on through backyards for a few block before it ducks uphill behind the trees. The smell of wet grass fills the air.

Those two scenes are quite different. We both envision our scene in a way that best suits our imagination, based on our own experiences.

The mind is a very powerful tool. The imagination has the power to evoke emotions much stronger than any visual cue could ever do. Fear is simply your mind imagining what might happen. Inspiration comes when you imagine what the future might hold.

One of the reasons for Alfred Hitchcock’s success as a movie director was his ability to stir the imagination. His scenes didn’t show all of the violent details. He may show a shadow while you hear the screams in the background. He might simply show a coffee cup while you only hear the struggle between the two characters. Your imagination makes the scene much more powerful, emotional, and believable than any scene he could show you.

When you’re preparing to record your podcast, determine what emotions will make your listeners take action. Decide what you hope to make your listener feel. You want the stories you tell to help evoke those emotions. Use wonderful, vivid details within your story that will dance in in each listener’s imagination.

You can activate the imagination of your listener by painting verbal pictures. Put your listener in the moment by asking them to imagine something, like I did at the start of this post.

You are receiving so many requests to appear for speaking engagements that you are close to hiring someone who will simply manage your appearances.

You can see the requests coming in. Are people e-mailing or calling you? I don’t know. That is the beauty of the imagination. If you prefer e-mail, you will envision people e-mailing you. If you like to talk to people on the phone, you can imagine people calling you. You will see in your mind the situation that is most beneficial to you. I only help you paint that picture.

The power of storytelling comes into play when you stir emotions by painting verbal pictures in the imagination of your listener. For imagination to kick in, you have to start off with enough details first. Give listeners a base and then allow them to fill in the blanks.

This is where audio and podcasting become the visual medium. The story comes to life visually in your imagination. The imagination stirs emotion within the listener, and emotions are powerful for turning that first-time listener into a subscriber and turning that subscriber into a fan who will promote your show to his/her friends.

Some podcasters out there are very good at painting visual pictures to evoke emotions. Share your favorites in the comments!