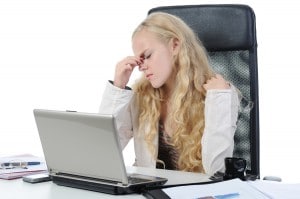 I was in second grade when I wrote my first blog post.

Okay, back in 1992, blogging wasn’t exactly a “thing” yet. But I had just received a shiny Lisa Frank diary for Christmas, and the blank pages were killing me. I had to fill those pages, and I had to do it now, before the white sheets drove me crazy.

So that night, I wrote my first entry. Or, at least, I tried. But as I sat there with purple gel pen in hand, I didn’t know what to write. I had so much to say that I didn’t know how to start writing. I began to panic. How would I ever grow up to be a famous novelist if I couldn’t even write a diary entry? I can remember my cheeks streaked with tears that first night as I cried myself to sleep, my new diary still completely empty.

Eventually, I filled that diary and several others like it with my joys, frustrations, and deepest, darkest, childhood secrets. Reading them now is hilarious. I was an intense child. And they are clearly “blog post” style – I wrote to a reader, not to myself, with apologies when I didn’t have time to write for a few days.

To this day, though, what sticks out to me most about writing in my diary is that terribly agonizing feeling of having a world of word jumbled in my head and not knowing how to start. It is one of the most frustrating part of being a blogger.

The Power of a Good Opener

Online, you a reader’s attention for only a moment. They’re gone in the blink of an eye. The best blog posts, the ones that thousands of people stop to read, have one thing in common: their opening paragraphs are awesome. I mean truly awesome.

And they’re engineered to be that way. The Internet’s top bloggers don’t get lucky. They know that a strong opening that really grips the reader is going to keep the reader reading and, eventually, sharing. Without a great opener, it’s nearly impossible for a post to go viral.

The Power of a Good First Sentence

You know that moment you write something good. You just know it. The sentence sings.

And then, suddenly, the floodgates open. The words begin to flow, I get into a groove, and the rest of the post makes it out of my head. The first sentence I write isn’t always the first sentence of the post, and sometime I end up cutting that sentence in editing or moving it to a different post. Having a first, finished, good sentence, though, is powerful. It unlocks the block in your mind and gives you the confidence it takes to write the post.

That’s something lost of people never talk about: blogging takes confidence. Your words are going out there for hundreds, thousands, maybe even millions of strangers to read. They matter. Writing words that matter is scary. When you don’t know how to start, panic sets in, because people are counting on you (even if they don’t know it) to improve their lives in some way.

How to Start Writing

So how do I do it? I’ve written thousands of blog posts (no, I’m not exaggerating), and many of them have started with me wanting to throw my computer out of the window. So what’s my secret?

I’m sorry to say that it’s nothing magical. The way I write so many posts, always jumping that hurdle of not knowing how to get started is this: I force myself to just start.

I do a little outline of all the topics I want to cover in the post, and then I start writing. If I don’t know what to write, I just write something. Even if it isn’t good. I don’t let myself delete that sentence and go back to a black screen. I write another sentence. And another. I write until I have at least one good paragraph, then I delete all the crap and re-read what is left. And then, I don’t feel so bad. Because I have something that doesn’t completely suck.

I have a start.

Even on my worst days, when the agony of not being able to put my words on paper feels like it is strangling me, I don’t let myself quit. Sometimes I get mad and slam my laptop closed a little harder than I probably should. I go for a walk, I get in the kitchen and cook something (that’s my zen place), I read a few chapters.

And then I make myself write again.

Don’t give up. Don’t let the panic drive you to tears like it did to me when I was a kid. Blogging is not easy. Let me say that again: Blogging is NOT easy. Sometimes you have to force yourself to keep going, even when you want to stubbornly quit. But once you get that first good sentence ready, it will get better. It always does. You just have the first hurdle to jump, then you’ll be running downhill from there.

Tagged with: blogging how to get started writers blog writing
Share