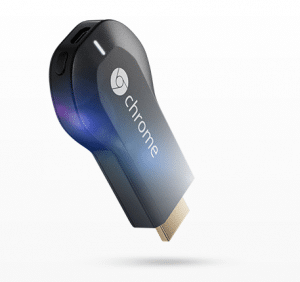 At first, blogging was a brand new concept, but today, everyone and their grandmother has one, and most successful businesses use them as marketing tools. Then, podcasting was the new kid on the block, but a 2012 report shows that “as many as 40% percent of Americans now listen to audio on digital devices, and that is projected to double by 2015, while interest in traditional radio—even the HD option—is on the decline.”

Now, it is Web TV’s turn. The train is moving full steam ahead with companies like Microsoft catering to viewers with their latest gaming console, smart TVs being set up for watching video online, and companies like Netflix developing original online-only series like the latest season of Arrested Development and the extremely successful Orange is the New Black.

This revolution is perhaps defined by a new device called Chromecast, which is available from Google.

One of the biggest problems with Web TV has always been the inconvenient nature of the Internet for viewing anything longer than a minute-long video. You can’t really enjoy a web series with your family huddled around a laptop or an iPad. Viewing on your television is possible, but only with the right devices, which are typically either expensive (like a gaming console) or inconvenient (like a cable you run from your computer to your TV).

Chromecast changes that. It costs just $35 and once you plug it into your TV’s HDMI port, you can send (“cast”) media directly from YouTube, Netflix, and the Google Play store from any Android or iOS device. Or, just pull up Chrome on your computer and cast anything in your browser window. While there are few apps with a cast button currently, the browser option means you can watch just about anything on your TV, using your computer as the remote controller.

Accessibility is an important step in making anything mainstream. With Chromecast and other devices like it that I’m store will be hitting in the market in the next few years, web series can compete with television shows.

Television has always been a social activity. You sit around the TV with your family to watch the latest episode of your favorite show, then you talk about it with your friends the next day. With the rise of social media, television has become even more social, especially with networks like Get Glue, which cater to fans who want to talk about specific shows.

Web series take this to a new level, since they live online, but the traditional social part, where watching episodes is an event, has always been missing, since it wasn’t convenient to to watch on a larger screen. So, although you could enjoy chatting online about your favorite shows, watching web series was more of a solo activity. With that changing, it is easier for web series to be more social in person, not just online.

With devices like Chromecast, will web series be pushed into the mainstream just like blogging and podcasting? The jury is out, but I think this is a major step in the right direction.