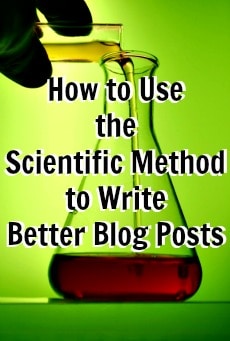 Despite science not being a strength for me in elementary school, lesson I do remember is the scientific method. I liked the step-by-step process of discovery, and even won the fourth-grade science fair because I was so good at executing this method of experimentation.

If you think elementary school science has no bearing in your life, you’re missing out on a great opportunity to use the scientific method to write blog posts. Not every blog posts lends itself well to the scientific method, but if you’re testing a theory or making an argument, it can help lend credibility to your post and explain your findings in a clear and concise way.

Need to brush up on your science skills? Let’s go through each step of the scientific method to explore how you can use it to write blog posts. In this post, I’m going to refer use “How Lying Can Vastly Improve Your Blog” as an example of a post I wrote using the scientific method, so you may want to open this link in a new tab/window to refer to it.

Step One: Ask a Question

The first part of the scientific method is to ask a question. This is what start the entire process. The question in my example blog post was: Can lying to myself help me improve my blog? You can leave it at that, but when writing my post, I prefer to take the route of explaining why I am asking whatever the question may be. We’re bloggers, after all. Telling the story is part of what helps draw people in.

This is a step that many bloggers skip over. However, adding some research to your posts makes it a much stronger final product. In the case of my example, I did some research on lying and what others say about self-deception. I included several links to my findings.

I find that in topics relating to blogging and social media, understanding the psychology behind our behaviors is extremely helpful. Depending on your topic, you may also want to find out what other bloggers have written about it before. If I were a scientist, opinion might not matter to me, but with this modified version of the scientific method for bloggers, opinions, especially of top bloggers in your field, matter very much. And if you confirm their opinion, you can reach out to them to let them know your results.

At this point, it’s time to narrow your focus and construct a hypothesis that you can test. This is a little more involved than step one, where you just ask a general question, and you want it to be a statement that you’re testing, not a question. In other words, what do you think your experiment will prove?

So, in my example, my hypothesis was: I will write better blog posts if I believe someone will be reading them as part of my portfolio.

It’s important to be honest about the concerns you have regarding your hypothesis. For example, I noted that because my lie was self-deception, I was aware that it was a lie. A lie told by someone else would be more powerful.

Step Four: Test Your Hypothesis by Doing an Experiment

This is the fun part: test your hypothesis. For kids, it means mixing baking soda and vinegar to watch a homemade volcano erupt. For you, it means writing blog posts or using social media or otherwise changing your behavior to see what happens.

Three things to keep in mind when doing an experiment:

I’m sure some scientists out there are cringing at my idea of an experiment, but we’re not trying to cure cancer here. It’s okay to be a little more relaxed than you would in a laboratory setting. But you’ll get better results if your experiment is structured. So, in my example, I told myself that I was applying for a new job and someone would be looking at my blog posts as a factor in deciding whether or not to hire me. I even browsed some job boards to make the self-deception more “real.”

Having a controlled environment is important. Otherwise, your results could be reflecting factors other than what you are testing. For example, my blog posts will automatically be better if I am super passionate about a topic. So, for my tests I trying to choose topics that I am moderately passionate about, but not that I had some kind of deep burning desire in my soul to write about.

I also wrote about a myriad of topics, from Twitter to business values to web TV. Whenever you experiment with your blog, its important to look at your results over time. I always find it extremely frustrating when someone tries something new on their blog for one day and then proclaims it doesn’t work. You need to give experiments a chance.

Lastly, you have to be able to measure your results. If your hypothesis is “Tweeting out more links will bring me more traffic” but you don’t have Google Analytics or another such tool set up on your blog, how will you know if it works? It might seem like you have more traffic, but maybe you in fact have the same amount of traffic, but more comments.

Step Five: Analyze Your Data and Draw a Conclusion

Next, you have to take an honest look at the data you’ve collected from your experiment. It’s easy to manipulate data to believe what you want to believe. Try to keep an open mind! For example, once tested whether or not pop-up ads increased my subscriber numbers. They did. Even though people complain about pop-ups, they work. It was something I didn’t want to believe, but the numbers proved me wrong.

During this step, it’s also important to look at data holistically. Data can easily be manipulated if your only look at one piece. So, if you are testing pop ups, you might say that they work because you saw a spike in subscriber numbers. However, what happened to your unsubscribe rates? Or your bounce rates? Or the number of complaints you received from your community?

In addition, I believe it is important to sometimes say, “I don’t care what the data says. This is not right for my readers.” Sometimes we get too caught up in what works that we forget what’s the right thing to do. I wrote about this problem here. Scientists may not consider their feelings about a result, but they would consider the ethics, practicality, and side effects behind their experiment’s conclusions.

The last part of the scientific method is to communicate your results. Scientists publish papers and report findings, often struggling with this step. As a blogger, you should have no problem communicating your results! As you write your blog post about your experiment, keep the entire scientific process in mind. Talk about your question and the research you did. Outline your hypothesis/experiment and analyze your data. Using this process to structure your blog post makes sense.

You blog post doesn’t have to read like a technical report. After all, this isn’t a lab. It’s a blog. Even though I used the term “experiment” in my example post about self-deception, I don’t think people read that post and though, “Oh, she’s using the scientific method to test a hypothesis.” Give your post some flavor.

Overall, I’ve found that using the scientific method has helped my up my game when writing blog posts. I encourage you to try it out yourself–and if you do, definitely come back to this post to leave a comment telling us about your results.