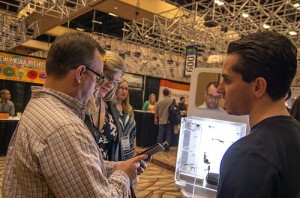 Whenever I attend NMX or another conference, I always make it a point to visit as much booths on the show floor as possible. At first glance, it just looks like a bunch of people trying to sell you stuff. And it is.

But the show floor can change your life. It did for me. That sounds a little dramatic, but when something makes this big of a difference in your life, the dramatics are justified.

Back in 2010, I was a brand new staff member with NMX (BlogWorld at the time). I hesitate to use the term staff member, because really, at that point, I was contracted to simply write some blog posts for them. They recognized my ambition and allowed me to bring ideas to the table to grow my role with the company, but that’s a story for another day. My point is, in 2010, I was off to my first BlogWorld, and I was super excited to attend sessions and network with my peers.

How Being a Total Geek Gave Me a Different Perspective

BlogWorld was not my first conference, however. Prior to working with NMX, I co-owned a video game blog, so I attended several “geek” conventions per year to learn about new games and technology. Most of these events were open to the public, not just for professionals in the gaming industry.

At these conventions, education is secondary (unless it is a press-only event like E3). Yes, there are panels for entertainment, but if you’re there to do business, the show floor is where you need to be. That’s where you’re going to learn about new games, get review copies before said games are released, land sponsorships, schedule interviews, and so forth.

So, it was second nature for me to visit the BlogWorld show floor. Of course I would spend time at the booths. Wouldn’t everyone?

I was surprised to learn that some of my fellow attendees weren’t planning on spending any time on the show floor at all. One person told me they’d do a quick run-through to see if there was any good swag, but that’s it. Another told me that time could be better spent networking in the halls. 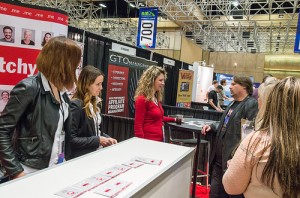 I was dumbstruck. Perhaps this kind of event is different, I thought. After all, what I had gone to in the past was more about entertainment and this conference was more about education. Still, I slotted some time in my schedule to at least take a gander.

When I walked out of the show floor at BlogWorld, I was approximately $3000 richer.

No, I didn’t win some kind of giveaway by putting my business card in a fishbowl. But what I did do was make some deal and learn about some plugins, ad networks, and other tools that I still use on my personal blogs to this day. I even landed a sponsor for one of the sites I was running at the time.

In all, I estimate that spending just a few hours visiting booths on the BlogWorld show floor put about three grand directly into my pocket with the money I made or saved based on the companies I met with that day. This repeated at every BlogWorld/NMX since, whenever I visited the show floor. One company (Zemanta) even interviewed me for their blog, which led to increased exposure.

Indirectly, my time spent on the show floor was worth so much more. When you walk through one open door, opportunities have a way of multiplying.

So the next time you attend NMX or any other conference, I hope you won’t write off the show floor. This is an incredible resource for building your business, and our fantastic sales team is always hard at work bring in even more exhibitors to make the show floor as valuable as possible.