When we talk about video and new media, we’re usually talking about web series. But I think we would be wrong to ignore the ways traditional television shows and networks are also finding new and interesting ways to connect with their online audiences. 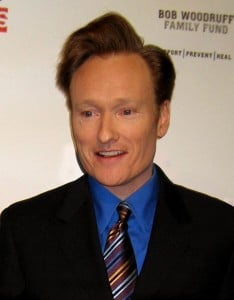 So, last night when I was channel surfing and happened upon the very beginning of Conan, I knew I had to blog about their “Occupy Conan” show today.

For “Occupy Conan,” the producers posted an entire episode of the show online and asked users to submit videos of their favorite parts, being as creative as possible. They then stitched together the video submissions in small blips to recreate the entire episode. Submissions included clay-mation, live action with green screens, puppets, videos from celebrities like Tina Fey and Joel McHale, and even an homage to Stick Stickly. At some parts, they showed the real show in a split-screen action, but most of the time they simply showed the user submissions.

Through the entire episode, Conan himself was live-blogging from the duel-screen app, available for download on his website.

Here are a few of my thoughts on this show:

As many online content creators know, video is hard. Although many fell into the so-bad-they-are-good, some of the submissions were amazing in terms of quality. When someone spends that much time creating content for you, it really solidifies their fandom. Even people who didn’t create videos get the warm fuzzy feeling because the submissions are from “us” – the Team Coco community.

“Occupy Conan” was really different. I’m usually a “sometimes I catch it while flipping” Conan viewer, but this was so weird that I had to watch. Late shows are all pretty similar, so even though an entirely fan-created show was definitely a risky idea, doing something different is a breath of fresh air.

I bet a lot of new people checked out the duel screen app in order to see what Conan was live blogging. After every commercial break, he had a short clip promoting the app and talking about what they were doing.

Now that people have seen one, I bet the next time, people will create even cooler stuff to submit. It’s a contest of sorts, since there’s only so much airtime and they can’t show everything. The bar has been set.

Whenever you do something weird, you get attention from the press. I’m sure Conan will be heavily discussed over the next few days, and whether people liked the show or hated it, starting a conversation online, especially where people can debate, is definitely a major way to promote your show while spending no advertising dollars.

Not only did Conan live blog the episode, but they also took the conversation to social media. The episode had its own hashtag, which was mentioned several times, giving fans a way to interact on Twitter. Creating an episode-specific or even just show-specific hashtag is something I think more shows need to be doing. Chris Hardwick announces a hashtag during each episode of The Talking Dead, for example, and it is a great way for fans to interact with one another.

At the start of the show, they said they received “hundreds” of submissions. Now, to you or I, getting hundreds of video submissions might seem amazing, but Conan averaged 1.1 million viewers per episode in 2012, according to Nielson. That’s a huge community, so to receive only “hundreds” of submissions makes me think that that they didn’t advertise enough, didn’t give people much time, didn’t explain the directions well enough, or had some other problems. They should have gotten thousands, not hundreds.

It was a good idea, but it’s not something they can do every week. Once a year, if ratings were good enough, is pretty much as often as they can do something like this without it losing its appeal. So, although an interesting idea, it’s not one with a lot of mileage.

One of the appeals of late night talk shows is that they are relatively inexpensive to produce. Sure, you have to pay the host, but the set doesn’t change from week to week, and guests are there to promote stuff, not get paid. This show, however, undoubtedly took a long time to create because people had to sort through submissions and edit them together. Time is money, so I’m sure this wasn’t a cheap endeavor.

As far as I know, there were no prizes for people whose clips were used. However, they missed an amazing opportunity to give a little prize of credit and encourage even more social media action. With each clip, they could have put the creator’s Twitter handle somewhere small on screen so that people could Tweet at and follow their favorites.

Not every submission was a winner, and I’m sad they showed that one. If you saw the episode, you know which one I mean. Talk about ugly.

My final verdict is that this was a great idea, despite having some problems. Did you see the show? What did you think of it? What would you add to my good/bad/ugly list? Was it great strategy for competing with web TV or a silly publicity stunt? What have you seen other shows doing to be more interactive? Let’s talk about it in the comments!