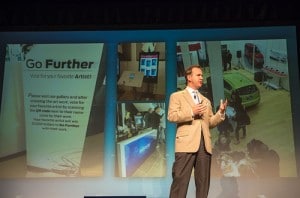 Ranked by Forbes as one of the top 10 influencers in social media, Ford Motor Company’s Scott Monty has been called “an unstoppable force of nature,” “the best corporate social media lead on the planet,” and “a visionary.” We  had the pleasure of seeing Scott’s keynote today at NMX 2013. Here are some of the best quotes from his talk:

Echoing something Amy Jo Martin said earlier in the day, Scott talked about how important it is to actually engage with your customer, not just broadcast your message. Poll your customers. Ask for their feedback. And above all else, show that you’re listening and that you care.

Encouraging your fans to be a part of a bigger community helps to break down those barriers between customer and brand and instead just be on a level playing field, where everyone is just talking about something they love (like cars, in Ford’s case). Scott talked about how important it is to add that element of fun into what you’re doing so you’re not just selling, but also entertaining.

Want to see Scott’s entire session? All of our keynotes are being live-streamed and archived. Head over to NMX University to see our keynotes and additional bonus content live from the show.

At Ford, Scott heads up the social media function and holds the title Global Digital &Multimedia Communications Manager. He is a strategic adviser on all social media activities across the company, from blogger relations to marketing support, customer service to internal communications and more, as social media is being integrated into many facets of Ford business. Prior to joining Ford in 2008, Scott served as Consigliere for crayon, a strategic marketing firm,and with PJA Advertising + Marketing, a boutique BtoB agency. In addition to his professional responsibilities, Scott is an active blogger and podcaster.

He writes about the intersection of advertising, marketing and PR at The Social Media Marketing Blog (www.scottmonty.com) and also writes The Baker Street Blog and I Hear of Sherlock Everywhere, two literary undertakings. Scott has been featured in hundreds of news and business publications in print and on the web, in dozens of books, and on a variety of mainstream media, including NBC, NPR, CNN and The Wall Street Journal.

Scott is a recognized thought leader in the social media industry and frequently speaks at industry events. Scott received his Master’s in Medical Science from Boston University’s School of Medicine concurrently with his MBA from BU’s Graduate School of Management. He lives in Michigan with his wife and two young sons, golfs all too infrequently, and has a hidden talent for voiceover work.Oh, and one last little-known fact: Scott coined the Oxford Dictionary of English-accepted term “tweetup.”