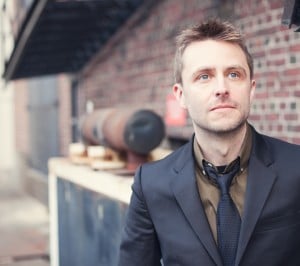 True story: I’m so excited about this NMX announcement that I can barely write this post. So I’ll just get right down to the big news: NMX is proud to welcome Chris Hardwick from The Nerdist Podcast and The Talking Dead as a keynoter to our 2013 show in Las Vegas this January!

Chris has built a new media empire – or as he so fondly calls it, a “nerd media empire.” He started his nerd website and podcast in 2008. Along with co-hosts Jonah Ray and Matt Mira, the podcast features guests ranging from Mythbusters‘ Adam Savage to Larry King to the cast of Doctor Who.

Since it’s inception, Chris has partnered with Peter Levin (GeekChicDaily) to form Nerdist Industries, and what started as a single podcast has since turned into an entire network of podcasts, a YouTube channel filled with premium content, the Nerdist News newsletter, and even a TV show on BBC America.

Nerdist Industries is now the digital division of Legendary Entertainments, where Chris and Peter serve as co-presidents.

You also might know Chris as the host of The Talking Dead on AMC, a weekly talk show-style program that airs after The Walking Dead every week. The show, which he recently announced would being expanded to a full 60 minutes instead of having the previous 30-minute time slot when returning in February, features fans’ quotes and questions via social media, an online poll to go with the episode every week, and continues online for 15-20 minutes after the television program ends. So, it’s combining the online and offline world in a way that few other programs do.

Oh, and Chris is also a writer for Wired Magazine. And hosts events like Course of the Force, an annual Comic-Con lightsaber relay. And filmed a Comedy Central special, Chris Hardwick: Mandroid. Really, what doesn’t this guy do?

I might have a little nerd crush, in case that wasn’t obvious!

You definitely don’t want to miss Chris’ fireside chat with Leo Laporte at 4 PM on January 7, 2013 at NMX! If you haven’t purchased tickets yet, you can register right now at the NMX event site. Register by Friday, December 14 to save up to $200 on your ticket!

Note from Rick Calvert, NMX Founder: I am a HUGE WALKING DEAD FAN and love watching The Talking Dead after the show every week. I am guessing a lot of you are fans, as well. I can’t wait to see if Chris can share any inside news on the show’s return in February. Maybe even bring us a sneak preview?

Favorite line from the last show (which was a tweet from a fan) “If you put Merle, The Governor and Hershel together you have an actual Pirate.” I almost fell out of my chair. What is your favorite line or scene from the show this season?