Even if you’re not a fan of zombies, you have to respect The Walking Dead. This AMC original series, based on a comic book series of the same name, has won several awards, including two Emmys, and has been nominated for a whopping 43 major awards overall. 10.9 million viewers tuned in for the season three premiere, making it the most-watched basic cable drama telecast in history, and the show even has its own devoted late-night talk show, The Talking Dead, with host Chris Hardwick.

This blog post isn’t about what you can learn about blogging from zombies, though. Today, I wanted to actually look at this television show and why it is so successful (and how that relates to your content!). I truly think what sets it apart from other basic cable shows is not its geeky appeal or marketing ploys, but rather its top-notch content.

(And for those of you who haven’t seen the show yet or aren’t 100% caught up, don’t worry – this post contains no spoilers!)

The Devil’s in the Details 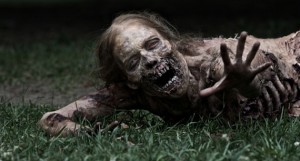 In the very first episode of Season One, protagonist Rick Grimes wakes up in a hospital to find that the world has gone to…well, you know where. He wanders toward his home, confused, an in one of the most iconic scenes, sees his first still-moving “walker”: a female zombie who has been ripped in half, but is still crawling toward him, trying to bite him.

This show’s special effects are nothing short of amazing. That scene is movie-quality, as is most of the show. In fact, their special effects department has won numerous awards.

Seeing as this is a zombie show, it would have been really easy to focus on the story alone and settle for campy special effects. They choose instead to spend money and time on the details to get it right. I think that’s where some bloggers fall short. Writing great content is important, but have you taken the time for the details, the finishing work. Is the post formatted well? Did you add interesting and relevant images? What about statistics, quotes, and links to back up the information?

Good content is a dime a dozen online. We like to think it’s not, but the fact of the matter is that despite all the crap you’ll find online, there are also thousands of amazing bloggers out there. If you don’t care about the details, it’s hard to stand out from the crowd.

What I find extremely intriguing about this television series is the amount of restraint the show’s writers use when telling this story. At the end of the day, it’s a tale about the zombie apocalypse. You want to please fans? Show some us the zombies! Show us gruesome zombie kills, horrifying human deaths, and disgusting walking corpses. Granted, if you’re not a horror fan, that might not be your cup of tea, but believe me when I say that this community is hungry for the blood and guts scenes.

The show has its fair share of zombie goodness, but there’s a certain amount of restraint used as well. The writers delve deeply into character development and take time to set up the story. Some episodes actually have very few zombies at all. Fans complained loudly during season two that it was too much talking and not enough action, but this was not without purpose. The writers needed time to tell the story, in order to make the experience that much better for the audience. Too much time spent on the horror element and gross-out scenes and you begin to lose site of what the show is really about.

I see bloggers make this mistake regularly – giving fans want they want, not what they need. You have to please your audience, but don’t lose site of what your blog is really about. You’re the expert. It’s up to you to direct the ship, which means sometimes missing out on those traffic spikes in order to write content you feel your readers really need. Keep readers entertained, but never at the expense of the “storyline” – the reason you write your blog.

Lastly, I want to talk a bit about shock value. The Walking Dead isn’t afraid to surprise viewers, but in the right way. Some horror movies go for the cheap scare, the moment that make you jump when you realize the killer is standing right behind the character or a monster jumps out from behind the door. Sure, it makes your scream and jump in your seat, but this kind of shock rarely has any long-term value.

On your blog, you can write content that shocks readers in some way, gets them to click through and read your post, or you can go for long-term value.  Being controversial on your blog can lead to a landslide of traffic, but the value of this kind of traffic isn’t very high if you’re being controversial for the sake of it, rather than actually trying to voice a real opinion about a topic. Write content you really believe in, rather than writing posts that bait your readers. Building your traffic is a marathon, not a sprint.

If you want to learn more about creating great blog content, definitely check out the entire Blogging Track at NMX in Las Vegas this January. And if you want to talk zombies (or blogging..or both) definitely hunt me down at the show!