In May 1942, Nazis ordered a group of German filmmakers to go into what is today one of the most iconic areas of the time period: the Warsaw Ghetto. Here, over 400,000 Jews were kept as Nazi prisoners in conditions that most of us couldn’t dream of surviving. Rations without enough calories to survive, deplorable living conditions where disease ran rampant, and police brutality were some of the daily struggles for Warsaw Jews living in the Ghetto.

And yet, the Reich sent in a film crew. Writes Huffington Post’s Richard Z. Chesnoff, “Their perverse propaganda goal: to record for posterity examples of the religious practices and “sub-human culture” of the soon to be eliminated judische Rasse, everything from a circumcision ceremony to a burial service; from the extreme poverty of the many to the supposed lack of concern of those few Jews who still had some assets.”

The Nazi brand, when simplified, was “Jews and others who don’t fit our mold are bad people.” And they knew that the most powerful way to spread this message was not in telling this message to others outright, but rather showing it in story form. 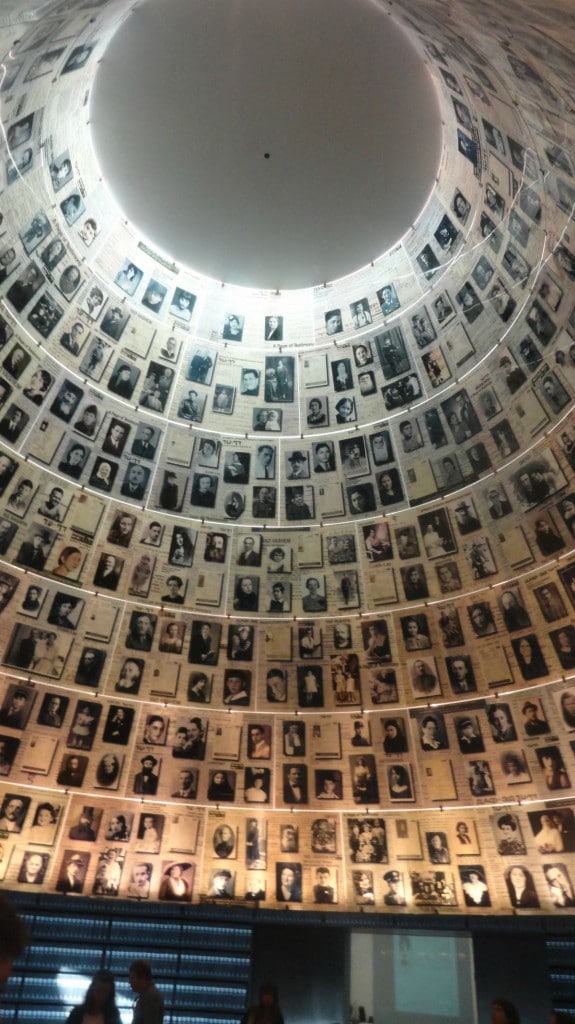 The wall of victims at Yad Vasham, identified using both Nazi and personal records

The film was ultimately never finished because the footage didn’t tell the story the Nazi party wanted it to tell. But on my recent trip to Yad Vasham, the World Center for Holocaust Research, Education, Documentation, and Commemoration, I was taken aback by this idea of storytelling during the 1940s. It was something even the Nazi party, perhaps the kings of propaganda, pegged as extremely important. Brands can still learn from this lesson today.

The Value of Information

Recording and sharing information are perhaps more important to your brand than you realize. It’s in these activities that your story has a beginning, a base for your entire brand. Leaders of the Nazi party certainly put their own heavy spin on the information that was shared with the public, but they nonetheless realized the importance of precise records to the story they wanted to tell.

“For the Germans, proper record keeping was part of proper management. Hence, careful records and organized paperwork were maintained of all Nazi activities, even when these were criminal and murderous. The only blatant exception to this record-keeping was the “Final Solution to the Jewish Question,” a top secret operation for which there was no official budget and whose records were camouflaged within other records or in special language. It was only in the very last stages of the war, when defeat was at the door, that various officials (e.g., Adolf Eichmann) and offices destroyed some of the incriminating records,” says one historian at Yad Vasham.

Lest you’re wary of learning a lesson from the Nazi party, fear not: protecting information as a way to shape ideas and culture goes back much farther than the rise of the Third Reich. In “Archives, Records, and Power: The Making for Modern Memory,” authors Joan M. Schwartz and Terry Cook write, “Archives are social constructs. Their origins lie in the information needs and social values of the rulers, governments, businesses, associations, and individuals who establish and maintain them. Despite changes in the nature of records, the uses for those records, and the need to preserve them, archives, ever since the mnemons of ancient Greece, have been about power – about maintaining power, about the power of the present to control what is, and will be, known about the past, about the power of remembering over forgetting.”

The value in proper information, then, is power.

What systems do you have in place to share information within your company?

From Brand Information to Messaging

Every brand’s story starts with facts: when the company was founded, why the founders saw a need for a product or service, how the business operates today. But presenting the facts to your audience isn’t the same thing as telling a story. That’s what the Nazi party understood and why they sent filmmakers to Warsaw. And ultimately, it’s why the Warsaw Ghetto movie never got made. What the Nazi party realized is that they couldn’t turn the information about their atrocities into a positive message about their party no matter how hard they tried.

You can’t turn bad information into a good story–and your shouldn’t try. Doing so is no better than a propagandized message or, as we like to call it today, “spin.” If you have to spin your information to tell your brand’s story, it’s perhaps time to rethink your company policies and the way you do business.

You can tell a good story without being dishonest. It’s all about presenting information in an interesting way, not about exaggerating or falsifying information. There are certain “storylines” that resonate with customers you can use to tell your brand’s story. I also recommend checking out this extremely detailed lesson on the elements of story structure for businesses. At the root of business storytelling, however, is this: be honest and personable. People spend money when they know, like, and trust you and your company.

Some companies do this extremely well. Take Ford Motor Company, for example, who combine online advertising with storytelling to make new product promotion more entertaining and personal. Another great example is Canon, who’s Project Imaginat10n is telling a new story of inspiration, creativity, and product simplicity for their brand.

Your brand’s story isn’t just a one-time tale with a defined end. As your business continues to grow, your story will expand. Thus, you need to update the information you share with your employees and edit your story to provide updates. Over time, your message may evolve, and that’s okay. What’s important is that you keep records well so that you’re always a credible source and continue to share your story in a way that is easily understood by your audience.