President Barack Obama made social media history with a tweet posted right after he was named the winner of the United States 2012 president election. This tweet surpassed tweets by celebrities like Justin Bieber to become the most shared tweet in history. As of writing this post, the tweet has been retweeted 0ver 793,000 times and favorited nearly 283,000 times. 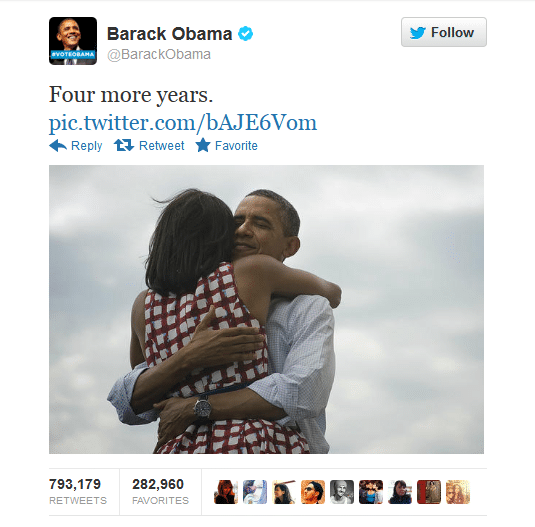 It’s not surprising that a tweet from the POTUS after winning a second term went viral, but the circumstances are just part of what made this tweet so readily shared. Let’s take a look at why Obama’s tweet became the most popular of all time and what you can do to add some of that special sauce to your own tweets.

The first and most obvious takeaway from Obama’s tweet success was that people respond to visuals. According to the Encyclopedia of Distances, about 65% of the general populus are visual thinkers, which is why teachers often make an effort to include visual aids when explaining a new topic and why infographics and Pinterest have both risen in popularity in the last year. The lesson here is to share images on social media when possible, especially if they help tell your brand’s story. People find these kinds of pictures easy to share.

Election night was a busy time for Obama and his staff, but they didn’t wait until a week later to celebrate Obama’s win with a tweet. They capitalized on the excitement of their audience by tweeting quickly after the election results were announced. The sunshine in the background easily gives it away that this is not a live picture, leading me to believe that staffers planned this tweet (and probably had tweet planned in case he lost as well). Can you take advantage over your audience’s excitement about something? Think about the timing of your tweets and plan them well.

It’s rare to get a look into the personal life of Obama, but this was an extremely personal picture with his wife, Michelle. Do you get personal with your audience? You don’t have to do so with every tweet, but allowing an occasional peak into your personal life can really help your audience connect with you. We’re all more likely to buy products from people we know, like, and trust. Personal moments allow people to get to know and like you, and from there, you can build trust.

One of the biggest mistakes you can make on Twitter is not giving people the space to retweet you. If you’re right on the 140-character cusp, you’re not leaving room for “RT @yourname” or any comments about your tweet. This forces people to edit your original tweet if they want to retweet it, and frankly, most people won’t take the time. Obama’s very brief tweet helped to make it extremely shareable.

Lastly, Obama’s tweet is extremely emotional. To see him hugging his wife is not only a private moment, but also one that tugs are your heartstrings, even if you you didn’t vote for him. Anything emotional, whether it makes your laugh or cry, is easy for people to share, so think about how you can elicit these feelings from your followers.

Of course, a tweet that becomes as popular as Obama’s is something most of us can only dream of, but we can still adjust what we’re already doing to make our tweets more popular. For even more tips, tricks, and techniques for using social media for your business, check out our BusinessNext conference, featuring sessions like “How to Become an Effective Social Business Today,” “Social Media and the Law: Emerging Legal Issues and Obligations,” and more. And if you’re a content creator, definitely check out our next NMX event in Las Vegas for tips on promoting your blog, podcast, or videos using social medial.