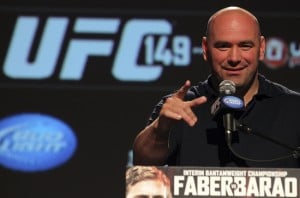 Our opening keynote speaker for day two of the conference this year will be Dana White, President of the Ultimate Fighting Championship (UFC). This will be a joint keynote for BusinessNext Social and New Media Expo. All attendees are welcome.

We have been teasing this for over a week now on our Facebook page, and we gave you several hints, but as of this morning, no one guessed it right. This is what I said on Facebook:

“I AM SO PUMPED RIGHT NOW! Yesterday we confirmed my personal favorite BlogWorld / NMX speaker of all time. Bigger than Mark Cuban, bigger than Mike Shinoda, Tim Ferris, Don Lemon, and all the rest.”

Dave (our co-founder) and I are both huge fight fans, and Dave’s entire family competes in martial arts. We have attended several of the UFC events in Las Vegas and you may have noticed us live tweeting from some of them. He has been chasing Dana for two years now, so finally getting the timing to work and having Dana join us has us pretty fired up!

For those of you that don’t now, The Ultimate Fighting Championship is the world’s leading mixed martial arts organization and the number one commercial pay-per-view event provider in the history of combat sports. Dana White, the UFC President, has blazed a trail to sports industry dominance on the social web in a very short time relative to the other major sports organizations, establishing UFC as the #4 overall sports brand on Facebook, behind only the NBA, Nike and WWE. He’s implemented a revolutionary social media policy, including a bonus compensation structure for UFC athletes engaging fans in conversation on Twitter. Dana himself has more than 2.2 million Twitter followers, regularly carries on frank conversations with fans, athletes and journalists online, and shares a behind-the-scenes view of UFC events by video blogging on YouTube, leading off each episode with his familiar “fight week, blog week!” The UFC YouTube channel has nearly 500,000 subscribers and over 370 million views.

Since purchasing the UFC in 2001 with partners Frank Fertitta III and Lorenzo Fertitta, White has helped revolutionize the sport. With White leading the charge, UFC programming is now available in more than one billion homes worldwide. Just last year, the UFC signed a landmark seven-year broadcast agreement with the FOX Sports Media Group, a sign that the fastest-growing sport in the world shows no signs of slowing down.

Here is a quote from Dave “I’m pretty fascinated seeing how they’ve changed the landscape for sports organizations using social media. Before Dana, there were few if any figureheads at the top of professional sports engaging openly with fans, not to mention encouraging pro athletes to do the same. From the fans’ positive reactions I’ve seen, and the explosive growth of mixed martial arts under the UFC banner, this is one eye-opening example of how smart businesses can spark huge growth in a tough economy through social media.”

We hope you can join us this January 6 – 8 in Las Vegas at the Rio Convention Center for New Media Expo and BusinessNext Social.  Dave and I will be in the front row!