Right now, I’m part of a delegation of tech-related bloggers visiting start-ups and companies based in Israel (mostly Tel Aviv and Jerusalem). The start-up culture in this country is extremely different than you’ll find in most areas of the world, so I started asking people why that is. Again and again, one word came up: Chutzpah 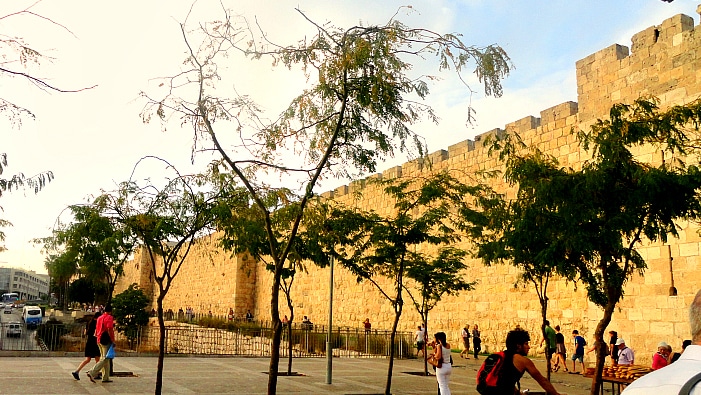 A shot of the Jerusalem wall from my trip

I think we all need a little more chutzpah in our lives, especially those of us who are  running blogs.

Chutzpah (or “hutzpa” as it is sometimes spelled in English-speaking countries) is a word that means slightly different things to different people. It can mean arrogance and audacity, but the meaning is a little deeper than this. More traditionally, chutzpah is a negative quality, but it can be turned around to mean something more positive as well. It can reflect courage and self-confidence, the willingness to get out of your comfort zone, perhaps in a presumptuous way and with a little sauciness, but because you’re passionate about what you’re doing.

The term is perhaps most successfully translated to mean nerve or gall, but in the entrepreneurial world, perhaps this is a necessary characteristic to possess.

Chutzpah in Many Forms

It might be hard to put your finger on what Chutzpah really means, but it’s easier to see it in action.

Chutzpah is a meeting with Tareq Maayah, the CEO of ShopZooky, a social shopping experience app for Facebook. Tareq actually lives not in Israel, but in Palestine. For those of you who don’t know the geography/politics, travel and relations between the two countries is not especially easy. Yet he drove to Tel Aviv to give a brief presentation and have dinner with our group in order to show us his product. That’s chutzpah.

Chutzpah is Lihi Margalit taking over Facebook for Newvem, a company that analyzes your AWS cloud usage. Chairman Zev Laderman said that before she was brought on, they didn’t really believe in Facebook marketing for their company and instead focused their efforts on other social media and community tools, like Twitter and LinkedIn. Lihi set out to prove them wrong, however, and today their page has over 10,000 fans and most of their updates are liked, commented on, and shared by hundreds of people. That’s chutzpah.

Chutzpah is Israel Aerospace Industries, whose men and women have to overcome struggles that other countries could never imagine due to lack of resources, political unrest in their part of the world and other complexities. For example, when countries launch satellites, they do so to the east, in order to gain momentum from the Earth’s natural rotation. Because Israel’s eastern neighbors would be pretty unhappy with anything being launching in their direction, however, Israel has to launch against the rotation of the Earth, to the west, so each launch has to be much more powerful than launches in other countries. As our guide for the day told us, “When we present problems to our engineers, first they tell us it’s impossible, then they prove that it’s impossible, then they do it.” That’s chutzpah.

Chutzpah in Your Life

It’s hard for me to not look at the Israeli people I’ve met on this trip and feel like I could be doing more for my own career and in my life, living it with more chutzpah. I ask myself:

These are not questions to take lightly. They’re also not questions I (or anyone) can answer overnight. What’s important is that we ask them and actively seek answers. And then take action according to those answers. And then ask them again. What’s important is that we have chutzpah, always pushing ourselves to do better, even when the going gets tough.

So ask yourself…do you have chutzpah? Or do you maybe need more in your life?