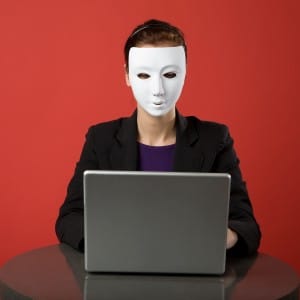 Every few years, when a well-known and roundly reviled Internet personality is outed by investigative bloggers, a vocal minority attacks the unmasking as a violation of free speech.

The argument, trotted out most recently by defenders of Michael “Violentacrez” Brutsch upon his 4,700-word public shaming by Gawker as “the Biggest Troll on the Web,” boils down to this: “No one deserves privacy, but we deserve anonymity.”

As a highly active Reddit user, Brutsch spent years sharing salacious pictures of underage girls as “jailbait,” voyeuristic photos of women in public and much, much worse, including pictures of dead teenagers. Now that his unsettling hobbies have cost him his job, supporters are claiming that the outing by Gawker’s Adrian Chen is a threat to free speech across Reddit, which bills itself as “the front page of the Internet.”

This idea, that bloggers are somehow threatening free speech by outing anonymous Internet users, shows a fundamental misunderstanding of the First Amendment. It is not an impenetrable shield for anonymity, nor does it make any American immune to accountability for our actions.

The First Amendment protects us from our government, but rarely from each other. In other words, the same law that gives Brutsch the right to say despicable things also gives Chen the right to call him out for it.

In fairness, being confused about the Constitution’s protection of free speech is understandable. The First Amendment is so short, it could be reprinted verbatim in two tweets, and yet it is quite possibly the most complex and carefully parsed law in the land.

The First Amendment is a protection granted by the government against the government. But outside journalistic circles, it typically gets simplified down to the idea that we can say whatever we want without repercussions. Of course we can’t.

Free speech always carries implications far beyond the legal system. It can get you ostracized by your friends, families and peers, not to mention making it difficult to find a job or seek public office. That’s always been the case, but it used to apply only in rare cases of whistleblowers and political dissidents. Today, the Internet has opened the danger of accountability to millions who live in a digital universe where being anonymous is the norm instead of the exception.

In times gone by, anonymous authors and snarky gossip columnists made the decision in advance to hide their identity specifically because of the content they were creating.

Today, that model has been flipped. Many Internet users begin within the comforting cloak of anonymity and then, seduced by the lack of consequences for their actions, start saying things that they would never say in public. Some devolve further into trolls, clutching that anonymity cloak as if it made them invisible. When it is suddenly stripped away, they realize just how precarious of a situation they’ve made for themselves.

Their only hope at that point is to recast themselves martyrs of free speech. They see their impending accountability and use it to terrify their legion of anonymous Internet peers. “Today, they came for me. Tomorrow, will they come for YOU?”

That’s an argument that occasionally has legs. When a record label sues an Internet service provider for the names of its users in hopes of finding an illegal downloader, we all get nervous. Companies rarely have the right to know about what we each do in the privacy of our own homes, and all of us are right to be concerned.

And it should be noted that Brutsch did relatively little to hide his identity. He attended public Reddit meetups and put himself up for questioning in a Reddit “Ask Me Anything” Q&A session. Brutsch’s wife and son are reportedly active on the site, as well, and have linked their accounts to his. His voice even appears on podcasts. Chen didn’t subpoena anyone to learn who Brutsch was or rifle through the man’s garbage; he just put a few obvious clues together once he got the right tip.

When word got out that Chen would be publicly identifying Brutsch, some Reddit moderators retaliated against Gawker by removing links to the popular blog from the areas of Reddit that they curate. The Politics Subreddit moderators went so far as to say they were punishing Gawker for its “serious lack of ethics and integrity.”

These moderators are well within their rights to evict Gawker. However, in the process, they send a pretty hypocritical message: “You suppress our guy and we’ll suppress you.” Since when do Redditors wage their battles by limiting access to information?