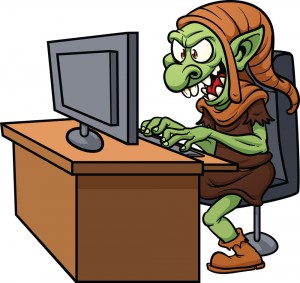 This is the story of how Leo Traynor met a Internet troll, and how we can use this as a launching pad to change the Internet. It’s a story every blogger – no, every Internet user – needs to hear, understand, and take action upon.

As he outlined on his blog, Leo decided to leave Twitter. He and his wife were getting derogatory messages from trolls, and although they brushed things off in the past, things got serious when Leo started getting deliveries to his home.

Delivers like a Tupperware container full of ashes and a note that said “Say hello to your relatives from Auschwitz” and a bunch of dead flowers with his wife’s Twitter handle on it. Twitter messages calling him a “Dirty f*cking Jewish scumbag” had now escalated to say “You’ll get home some day & ur b**ches throat will be cut & ur son will be gone.” and “I hope you die screaming but not until you see me p*ss on ur wife.”

Leo was scared. I would have been too, petrified.

And then, with the help of a friend who knew how to trace IP addresses, he found out who his troll/stalker/harasser was: the 17-year-old son of one of his friends.

And so, Leo got the opportunity most of us will never have. He got to confront his troll. Over tea with his troll’s entire family, Leo showed him the screenshots of the abuse, pulled out the pictures of the mail, and told the boy how scared and physically sick he had been.

The Troll burst into tears. His dad gently restraining him from leaving the table.

I put my hand on his shoulder and asked him “Why?”

Leo’s story isn’t the only one out there. Remember the story of feminist media critic Anita Sarkeesian, who so angered the Internet with her kickstarter project that people threatened to rape her and kill her. They even created an online “game” where the entire point was to punch her likeness in the face? Or how about the story of Patrick Frey Patterico, who’s critical remarks on his blog led to a SWAT team showing up at his house after phoney calls about him killing his family?

And this isn’t a new threat either. Back in 2007, developer and author Kathy Sierra famously cancelled her O’Reilly ETech conference appearance after receiving death threats on her blog, and other instances of online content creators dealing with trolls both online and off date back even farther.

When are we, as the users of the Internet, going to stand up and say, “Enough”?

The barrier of the screen creates a sense of disinhibition among Internet users. For most of us, this disinhibition means that we let our guard down and share struggles and triumphs with online communities even when we wouldn’t share those same experiences with our friends in a face-to-face setting. But for some people, this turns into a toxic disinhibition.

It’s Just a Game (dissociative imagination) – Like in Leo’s story, some people create this “game world” where the person online is just a character to them, and other people are just characters as well. Just like turning off a game, this manifestation of toxic disinhibition leaves the user feeling like they can turn it off because it isn’t real. And just like shooting zombies in a video game, how can someone be held responsible for something they did in a game world?

You Don’t Know Me (dissociative anonymity) – Because users can often be completely anonymous, they don’t feel vulnerable. Their actions can’t be linked to their “real” identity, so they can act out feelings of rage or hatred with no consequences even if those action are completely out of line with who they feel they really are.

We’re Equals (minimizing authority) – When you’re online, other people can’t tell if you’re the CEO of a major corporation or a fifth grader with no friends. The Internet is the great equalizer, and people believe they can say things without disapproval or punishment. They have the ability to be powerful online, even if they aren’t in “real” life.

This isn’t an exhaustive list. I really encourage you to check out Suler’s full article for further analysis of toxic disinhibition.

Beyond toxic disinhibition, it’s simply human nature to want to be part of a group. We have this pack mentality where we don’t want to stand out as the lone person not doing something, and when someone is being attacked, we don’t want to be the next target. It’s easy for lots of people online to gang up on someone when there’s a ringleader (or at least not say anything in opposition). All it takes is one bad egg and a few followers for an entire community to quickly dissolve. This is as true online as it is offline. We all want to be on the “right” side, and sometimes that leads us to make bad decisions.

What We Can – And Should – Do About It

We have a responsibility as online content creators. If you wouldn’t say it to someone’s face, don’t say it on your blog, on Twitter, on Facebook, or anywhere else online.

We obviously can’t stop other people from acting in certain ways online, but here’s what we can do, beyond ensuring our own actions are responsible:

I’ve always identified with the Gandhi quote, “If we could change ourselves, the tendencies in the world would also change. As a man changes his own nature, so does the attitude of the world change towards him. … We need not wait to see what others do.” In other words, be the change you want to see in the world. I’m an optimist to a fault, but if everyone reading this post takes action, we can make the Internet – and the whole world – a better place. So let’s do it!