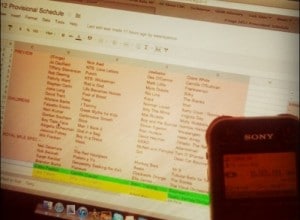 One of the many fun things about “making a plan” is that once you have your baseline, it’s very easy to go beyond that and find something magical. But recently, I’ve been using the power of planning to do something else. To make sure my podcast went out when I had no idea what I was going to do.

Some background is needed for this one. Firstly about the podcast, and then why the pre-existing plan was so important because of, well, life.

This was my eighth year of covering the Edinburgh Festival Fringe through a daily audio podcast. The Fringe itself is mind-bogglingly huge (42,000 performances by 2,695 shows, almost 280 stages), and many years ago I wondered if one podcaster could cover enough of the Fringe to make a daily show feel comprehensive.

The clue, of course, is that eight years later I’m still doing the show to critical acclaim. This year I put out 26 episodes, each running over 40 minutes, the majority of them having four guests and a musical number (preferably recorded live) to finish the show. It’s not an easy show to put together, as it all needs to be recorded around Edinburgh, between all the shows, and then of course edited and social media’ed every day to succeed.

And I look forward to it every single year.

Except this year. 2012 has seen a little complication. The month or two that I would normally spend researching and prepping for the August run was taken up with far more important matters at home – #BlameVikkisCancer. For anyone keeping track, Vikki’s operation was a success, but with the Fringe approaching, I was facing a blank sheet of paper.

Here’s where the power of planning came in very useful, because I reached back to 2011 for all the planning documents, notes, and diary schedules from last year’s Edinburgh Fringe Show. While the names were different, and the days were a little bit out of sync, this was something that I could simply trust that would let me deliver.

“Follow the plan, and the show will follow,” was my mantra at the end of July as I organized the interviews, reached out to various PR people, booked in shows to review, and sorted out the cross promotion arrangements with other sites. As I followed my diary and reports from 2011, if it happened last year on Wednesday 27th July, it was done on Wednesday 25th July this year.

Would this make for a show with any new ideas for 2012, that would really push the format boundary out? Probably not. But it would deliver a show, which was vitally important as the show is a co-production with The Stage newspaper and I had made the commitment to them many months ago.

It also matches up with one of my philosophies – every show needs a constant. In the case of the Edinburgh Fringe podcast this is myself, as the host. I’m the one conducting the interviews, reading the news, the voice that people would come back for.

The other constant is the structure of the show. It’s no coincidence that the format of the show follows the late night chat show template pioneered by Johnny Carson. That means the show itself was able to use all the same production notes, jingle beds, and interview grid layout as last year.

Because I had a well thought out plan that I could follow, I was able to build the foundations of the 2012 Edinburgh Fringe Podcast while my brain, frankly, was focused elsewhere. Each morning, when I came to produce that day’s show, there were more than enough interviews and musical numbers to choose from, and I could focus on putting together and presenting some great content.

All because I had a pretty comprehensive plan.

Making a plan is essential, not just for a business or starting up a new website, podcast, or blog, but for every project you do. And not just a few headers, really sit down, think through every element, document it, and make sure it’s clear enough for others to read and understand, yes even yourself in twelve months time!

And the results? Why not listen for yourself.