I first learned about Talenti Gelato a few years ago from a blogger friend who just happened to mention it on her blog. At this point, a few grocery stores were carrying three or four flavors, and when I noticed it at my local Giant, I decided to try a pint.

I became an instant fan, so I decided to follow the company on Twitter and Facebook. Their social media presence has made me even more of a fan of their product, and it’s a staple in my shopping cart, despite the fact that it’s more expensive that most other frozen treats.

Let’s take a look at how Talenti is absolutely rocking social media, and their efforts are resulting in more sales for their company.

I don’t know what system Talenti is using to monitor their social media efforts, but they rock at it. They aren’t just replying to messages they receive directly (a must for any company). They’re also going above and beyond and seeking out people who are talking about them, even if they are linking to the Talenti Facebook page or @ replying to them on Twitter. Check out this screenshot I recently took of their Twitter account:

Not only are most of their messages @ replies and RTs instead of just broadcasts, but they’re talking to everyone and anyone mentioning their brand. To test my theory, I randomly tweeted about Talenti Gelato without using their hashtag or @ replying to them directly. Within a few hours, they had retweeted my message:

As a fan, it makes me feel special that the company noticed me. Most companies don’t.

I don’t know why more companies aren’t using video to talk about their products. This is the video Talenti is featuring on their homepage:

Now, I’m not knocking the amount of time that certainly went into this video, but it’s nothing amazingly special that other companies couldn’t do as well. Having your founder get on camera for a quick video like this makes me feel much more connected to the company.

They didn’t stop there, though. If you visit the video page on Talenti’s site, you’ll find lots of other videos that highlight specific products, and on their YouTube channel, they’ve even started to post videos about what to do with old Talenti containers, which definitely fits into their eco-friendly company image.

My favorite video of theirs has to be this creative promo where people use Talenti containers to make music. It’s like a real commercial you would see on TV – but on YouTube!

Fun Interaction with Fans (but always with a goal in mind)

Talenti isn’t some stuffy, stuck-up company, despite selling an artisanal food product. They’re fun and they talk to fans like people, which helps to break down that divide between business and consumer. After all, we’re all more likely to buy from people we think of as friends. Here’s a great examples of one of their Facebook status updates: 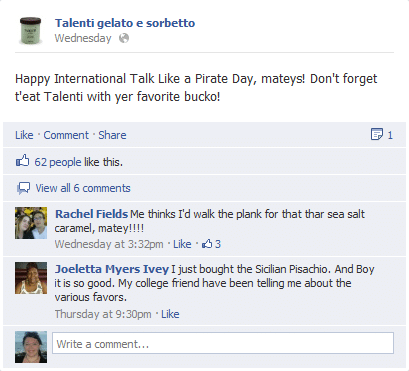 More importantly than just pointing out their fun communication style, however, is recognizing that Talenti has a goal with their messages. They rarely go off on tangents or talk about topics unrelated to their product. You do want people to feel connected to the culture of your company, but you should also have a goal behind your communications. Talenti definitely does, even if fans may not be conscious of that push to buy more gelato.

On Facebook, EdgeRank is king, and Talenti is killing it. Their posts are all about interaction to help get readers as involved as possible. For example: 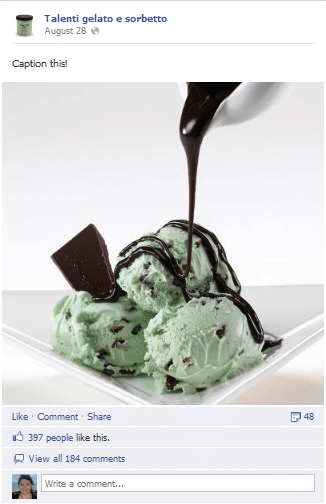 Check out not only the number of people who commented with captions, but also the huge number of likes and shares they got, simply because the image they used was irresistible. Talenti uses images pretty often, actually, which is important for EdgeRank. They also ask questions, run contests, remind users to hit the like button, and more.

Without interaction from readers, it doesn’t matter what you say or how often you update Facebook; no one will see it. EdgeRank is important, and if your company isn’t writing status updates with it in mind, it’s hard to be successful on Facebook.

All About the Product

What Talenti does best, in my opinion, is produce a quality product. If you go to their Facebook page or search for reviews of their product on blogs and other social media sites, it’s hard to find bad comments. People (myself included) just love what they do.

Your social media efforts are only as good as whatever you’re selling. So before you throw money into your online effects or devote any time to social media, fine-tune the product or service you’re offering. That way, your time online won’t be wasted replying to complaints and dealing with bad press.

Want to learn how to use social media better for your business? Join us at BusinessNext Social in Las Vegas this January – it’s going to be an amazing conference!