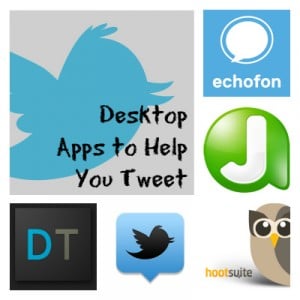 I absolutely love Twitter. Some complain that it’s turning into a link broadcast system, but I say that just means you’re following the wrong people. My conversations on Twitter are fun, interesting, and extremely helpful when I’m working on growing my brand online.

I have to admit, though: I don’t love the Twitter.com website. I find the functionality of this platform clunky at best, so I prefer using a desktop client. So today, I’ve put together a list of awesome Twitter tools that can help you make the most of this social media platform. And I hope that you’ll leave your favorite desktop client in the comments if I’ve missed any!

TweetDeck: TweetDeck is my desktop client of choice. I like how you can display columns, schedule tweets, and add multiple accounts so you can update from several Twitter profiles, as well as Facebook, LinkedIn, and other social media platforms. I actually use an old version of TweetDeck, preferring that to the newer version, but I feel like either is better than the Twitter.com website.

HootSuite: One of the most popular social media management tools our there is HootSuite. This is the desktop client our Director of Community here are NMX, Deb Ng, uses. Like TweetDeck, this tool allows you schedule messages and to update from multiple accounts, but if you want to add more than five, you have to pay for a pro account. If you upgrade, you can also integrate Google Analytics and Facebook Insights, and you can add unlimited RSS feeds (you only get two with the free version).

Destroy Twitter: With Destroy Twitter, you don’t get all the bells and whistles you do with other desktop clients – and that’s by design. This client is meant to be very minimalistic so it doesn’t use much memory. You also have some filter options if certain kinds of Twitter updates (like Foursquare) annoy you.

Janetter: Janetter calls itself “the best Twitter app for Windows and Mac.” Those are some pretty big claims! It’s similar to TweetDeck and Hootsuite in many ways, with the main difference in that you have tons of options for customizing the look. You can change the skin, wallpaper, font, and more with this desktop client.

Echofon: In the past few months, I keep seeing more and more people switching to Echofon. This desktop client will sync with the iPhone app version so you won’t see tweets twice, which is a nice function. It’s free, though you can pay for an ad-free premium version.

Other Desktop Clients: Some others that are less popular or include fewer functions, but which you should check out if you’re looking for that perfect desktop client include the following: