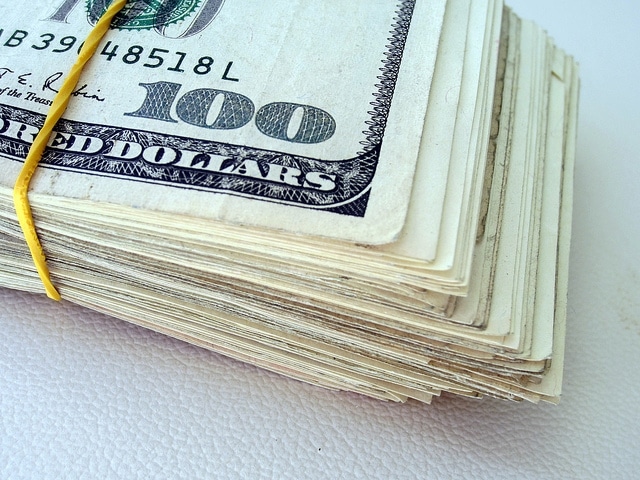 Have we moved past the notion that podcasting should generate no income? While there are certainly still many “purists” who think that all media should be free and that it should never generate income for the creator, it does seem that they are increasingly in the minority. There are costs to being a podcaster that climb ever higher as audiences grow and production scales. While it’s true that a podcaster can start off at square one with a cheap USB headset and a free hosting account, that changes when audio quality becomes a limiting factor to growth and video enters the picture (pun totally intended).

We’ll even accept foreign currency, if that’s what you’ve got.

Three primary monetization methods exist for podcasters and there are generally two ways to implement them: on your site or in your show. Many podcasters begin a show with a short advertisement (some go quite a lot longer… but I won’t name names).

And if I wasn’t writing for NMX, I’d show his picture and make a joke right here.

Running an ad or two for 30 seconds or a minute at the top of your show is one way to go. Other podcasters will take a break in the middle of a show to talk about an advertiser. These segments can last anywhere from half a minute to a few minutes, depending on the nature of the sponsor and the way the ad is integrated. Audiobook reviews, for example, can be tied into an advertisement for Audible.com. Least-used is the insertion of an ad after the show is over. It stands to reason that as soon as the host says “bye,” people will turn off the show. Ads at the end will not perform nearly as well as ads at the top or in the middle of the show.

Advertisers buying ad space on radio or television shows are nearly as old as the mediums themselves. Podcasters are not exempt from this form of income generation, and while it’s true that a young show or one without a large audience will not get the primo offers, the offers are out there. This is perhaps the easiest form of income to manage—you deal with the advertiser directly, you set a fixed rate by the week, by the month or even by the episode, and you get paid.

Sponsors for podcasts, just like radio, will simply provide you with a script or a pre-recorded ad to run during your show. Some advertisers allow you to write your own script. Either way, you will direct people to the advertiser either by links on your site or ads on your show (usually both). With the ads that run on your show, you’ll need to be able to speak their website addresses, which is not usually a problem—unlike what we face with affiliate marketing. The saying about a bunch spoiled by one apple applies here.

Unfamiliar with the concept? Heard some less-than-flattering things about it? Here is the rock-bottom truth: you, a website owner and podcaster, create a link to a product on Amazon (for example), only instead of using a regular link, you use a specially-coded “affiliate link.” When someone clicks that link and buys something at Amazon (for example), you get a small commission. You are being compensated for referring customers to a business, nothing more. With all this talk about clicking links, how can a podcaster work with this? You can’t speak affiliate links, right?

Well, no, you can’t. This is a sample affiliate link for the Blue Snowball microphone (yes, it’s one of mine. Full disclosure. PLEASE do not use it if you do not want to. I’m not after your clicks, I’m after your eyeballs right this second):

How can you possibly speak that on your podcast?! Clearly, you can’t…but you can speak a shortened link. Services like bit.ly or tinyurl.com will take that monstrosity and cut it down to a manageable size. You can also (and I recommend this) use a WordPress plugin called Pretty Link to shorten links on your own website. That link above, destined for Amazon.com, has been shorted on my website to this:

…and I can totally speak that link on my shows. When someone types it in after hearing it, it’s the same as if they had clicked the link on my website.

When it comes to raising money, asking for donations has a long, storied history in radio, television, podcasting, street corners and public schools. Sure I can spare three bucks. Go Wildcats! That’s the team’s name, right?

Many a successful podcast has been built on listener donations. Setting up a PayPal account and a form to collect money on your website is pretty straightforward these days and can often be set up in an afternoon. A call for donations can happen during a show in the same places that the other two forms of advertising run. A script like “You’re listening to listener-supported <show title>. Learn more at <web address>” can work wonders. A once or twice-yearly pledge drive, PBS-style, can also be a great source of income. Loyal listeners like to support the shows they enjoy—they don’t want to lose them.