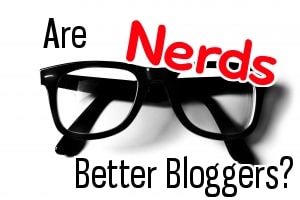 I’ll admit it; I’m a total nerd. My idea of a romantic date night is playing video games or Magic: The Gathering with my boyfriend. I’d rather hang out online than hang out at a bar (most of the time). I can quote Doctor Who on command and would rather watch Star Trek than Sex in the City.

Perhaps my nerd-dom is summed up in the fact that I couldn’t think of a more recent popular non-geeky television show than Sex in the City.

Being a nerd isn’t really a badge of honor for me as much as it is a fact of life. Luckily, being a nerd has made me better at my job as a blogger. Here’s why:

These days, being a geek is “cool.” Or so it seems. I would argue that living zombies and playing Madden with your “bros” doesn’t really make you nerdy. But regardless, nerds out there know how hard it was growing up loving books instead of cheerleading or chess instead of football. I count my lucky stars that I’m a girl, so I was never on the receiving end of a wedgie (do boys still give wedgies to one another on the playground?), but I was certainly teased and even bullied. It’s great experience for dealing with haters online. I’ve grown a thick skin over the years, which makes it easier for me to voice my opinions online without being fearful of people thinking I’m uncool.

Growing up, I was always the kid who actually liked going to school. The first day was exciting for me, and I would often start browsing through my textbooks as soon as I got them, even before we had homework assignments or had jumped into lessons. This love of education has really helped me as a blogger, because I’m constantly trying to learn new things in my niche. More importantly, I like the research aspect of blogging, which is where I feel like a lot of bloggers are lacking. The amount of misinformation online is astounding, and even most opinion pieces online could benefit from better research. Don’t just tell me why I should do something a certain way. Tell me what proof you have to back up your opinion.

To be successful as a blogger, you have to be passionate about your niche. Weirdly passionate. Nerds already get that. We’re fangirls and boys of weird stuff, whether it’s bringing Firefly back on the air and who shot first–Han or Greedo. We follow every snippet of news about books from our favorite authors  becoming movies, we spend hours creating fantasy characters for a new tabletop game, and we stand in line behind thousands of other people at ComicCon to see our favorite comic book artists. That weird obsessive behavior is what will make you successful in your niche, and trust me; nerds have weird down pat.

I wasn’t given a basketball scholarship. Making friends didn’t come easily to me. Getting a date? Let’s not even talk about that. Growing up, if I wanted something, I had to try really, really hard. Even with academics, the competition to be best among nerds is fierce, and if you aren’t working hard, you’re falling behind. Nerds have to work extra hard at everything they do growing up, so it leads to a very driven personality in many cases. Now, that’s not to say that if you aren’t nerdy, you aren’t a hard worker. But as a nerd, I personally learned to be a very driven person, working hard for everything I have with nothing just handed to me. This is a quality that has helped me be a successful blogger today. You aren’t going to be successful if you aren’t willing or able to put a lot of blood, sweat, and tears into your blog.

Whether it’s figuring out that math problem or writing a novel or beating a video game villain, nerds love a challenge. And really, that’s what blogging is–a challenge. If you’re someone who easily quits when things get tough, this probably isn’t the right path for you, at least not as a career. Challenge is scary, but it can also be extremely rewarding. When you embrace the challenge of blogging and combine that with your nerdy nature to be driven, passionate, educated, and willing to express your opinions even in the face of haters, that’s when you can truly start to build a better blog.

So let your nerd flag fly! Embrace the inner geek, learn to love your dorky self, and start building a better blog instead of repressing those memories of getting picked last in gym class.