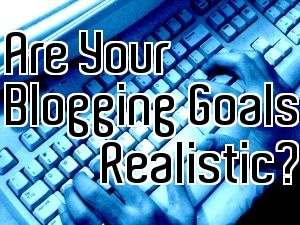 When I first started blogging, I had laughably unrealistic goals. It was 2006, and I was newly hired to run an op-ed blog examining religions of the world for a blog network. At that time, I was offered payment based on a percentage of the total Google ad earning on the site, plus a very small base salary per post (less than $10). I didn’t care about the base salary because I knew how well I could write. I knew my posts would lead to massive amounts of traffic. I know that huge traffic numbers would mean a lot of ad clicks. I knew that this blogging thing was going to be a piece of cake.

So I spent four hours writing my first post, which was about 250 words with no pictures or links in it. I hit the publish button, sat back in my computer chair, and waited.

Of course, as you can probably guess, everything I “knew” was completely wrong. If I remember correctly, I made less than $3 in ad revenue that first month, and this was typical during my time blogging on this site until they changed the freelance blogger payment method. I was making around $2 per hour working for this blog network, which was not quite what I had imagined when I took the job.

The Importance of Realistic Goals

Last month, I wrote about how important it is to ensure that your actions and goals align, but let’s focus for a moment just on your goals. If you start out with bad goals, it doesn’t matter what actions you take.

When I realized the reality of my religion blog, I was pretty upset. I imagined that I would be making hundreds or even thousands of dollars blogging under this model, and I hoped it could be a full time job eventually. My goal during that first month was to make at least $500 – and I came up drastically short. It was depressing. I wasn’t motivated to continue, and I questioned my abilities as a writer.

If you don’t have realistic goals, you’ll never be able to reach them. While challenging yourself is important, having unrealistic goals that you can never reach sets you up for certain failure. When you’re focused on trying to avoid this inevitable failure, you aren’t attentive to the ways you can succeed.

How Do You Know If Your Goals Are Unrealistic?

Every blogger should be pushed by goals. Setting goals like “get ten Facebook fans” is silly. If you don’t challenge yourself, you’ll never really be able to grow to your full potential. But don’t forget that the opposite is also true. Being discouraged by unrealistic goals can hold you back.

So how do you know if your goals are unrealistic? Here are a few indications:

Goals take time. If you’re trying to do too much too quickly, you will likely fail. Instead, take some time to study your blog so you can set relative goals. For example, if your blog traffic typically grows by 10% per month, it’s unrealistic to set the goal of growing by 50% in a month. Instead, try setting a goal of 15% and move from there. Before you try to achieve above-average goals, you have to know what average really is.

If your goals aren’t linked to actions, you will likely fail. Sure, your blog will naturally grow over time if you publish quality content, but natural growth is not really in your control. You want your goals connected to actions you can actually take to reach that goal. For instance, if your goal is to reach 500 Pinterest followers, just relying on people to follow your page without you actually doing anything is silly. Instead, list what you’ll do to get these followers. That way, you can actually achieve this goal, not just sit by and wait for it to happen.

Broad goals aren’t realistic because even if they are obtainable, you can’t really track your progress. For example, let’s say that your goal is simple “make more money with my blog.” Monetization is a great topic for a goal, but this particular goal is way to broad. How will you know when you’ve reached your goal? Technically, if you make a single cent more, you’ve reached you goal. So quantify your goals rather than being too general.

There are only so many hours in the day. If your goals don’t allow you to sleep, it doesn’t matter if you achieve them or not. Ultimately, you’ll be too burned out to care. Avoid challenging yourself so much that your goals are unobtainable without sacrifices that cost too much.

If you haven’t yet, sit down at your computer or even with a pencil and paper in your hands and make a list of your goals. Always ask yourself, “How can I get there?” whenever you come up with a goal. You want to push yourself to do things that seem impossible, but be careful to avoid goals that actually are impossible.