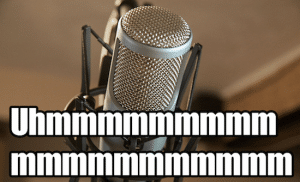 So, um, you know, there’s something that tends to worry new podcasters and even sometimes fluster experienced talkers. It has to do with, you know, effective speech and uh, verbal crutches. There are, ah, um, a lot of ways that a podcaster… okay, I can’t keep this up. Even typing “um” is driving me crazy.

Here’s the thing. You speak the way you speak. When you’re podcasting, you have a choice: you can speak in your own natural way, or you can try to alter your speech—if necessary—to remove verbal crutches and filler words. Heck, maybe your natural way of speaking makes you sound like Brian Williams or Katie Couric.

If your voice isn’t silky smooth and free of verbal hiccups, maybe a few things I’ve learned will be helpful. Oh, I’m not perfect. I still drop an “ah” on my listeners or a “you know” here and there. Still though, I’m ah, you know, a lot better than I used to be. Try on these seven tips for eliminating verbal fillers. To get started, you need to have a baseline—a measure of your speech patterns. That means you need to…

The best advice I ever got for eliminating filler words from your speech is to sloooooooow dowwwwwwwn. Filler words can creep in when your mouth and brain aren’t moving at the same speed. In my experience it happens because my mouth can’t keep up with my brain. As I’m speaking, I’m sometimes on the next train of thought before my mouth has finished getting off the first. For others, it might be the opposite: you finish speaking your thought before you line up exactly what you want to say next, so you fill that gap between thoughts with an “um.”

Slowing down your speech when your brain races ahead can force you to slow your thinking down-which is not as bad as it sounds. You’ll trip over fewer words, use fewer fillers, and sound generally more coherent. Slowing down your speech when you’re having trouble figuring out what to say next can help you make that transition without needing filler. You’re buying yourself a little bit of time to get where you need to go.

You know what’s better than saying “um”? Nothing. Literally, nothing—silence. Try it. Press record, and start talking. Make a concerted effort to simply stop talking instead of saying “um” or “uh.” This exercise doesn’t have to happen while you’re recording a show, but give it a shot under the same circumstances.

Be careful not to overdo it. I recorded a show shortly after trying this technique out, and later realized I had a 20 second pause in the recording. I was slowing down, I was using silence rather than fillers…and wow, was it bad. I had gaps in there you could drive the Batmobile through. Pausing for a breath, pausing for a moment, that’s fine. If your pauses go on for longer than it would take to say “um,” then you have a whole new thing to worry about-kinda like if you took up drinking to help you quit doing drugs.

Stare at this for 20 seconds and tell me it doesn’t feel like an eternity.

#4. Have Confidence in What You’re Saying

If you have no confidence in what goes into your mouth, you shouldn’t stick it in there. Same with what comes out. If you’re lacking confidence in what you’re saying, it might be better left unsaid. Sometimes though, we like to “think out loud” and come up with theories, concepts or ideas on the fly…while sitting behind a live microphone and device that records every noise we make. This is not necessarily a bad thing—a lot of really great material has been born of improv. The trick is to realize that even improv takes practice. With practice comes comes confidence. With confidence comes the elimination of the dreaded filler words.

#5. Talk With Your Hands

You don’t need to start conducting an invisible orchestra, but gesticulating while you’re speaking can be a great help. According to studies that I made up for this article, talking with your hands can help you cut down on filler words by up to 37.67%. Gesturing while you’re talking invests you in what you’re talking about. Have you ever spoken with someone who talks with their hands? Do they ever seem like they’re unconfident about what they’re saying? Gesturing invests you in your subject which makes you more confident which improves your speech.

Wait, what? No, don’t embrace the fillers that we’re trying to eliminate, but embrace a method of using them for good instead of evil. This might be a hard one to explain in print, but here goes. Voice modulation and inflection can help tell a story, and using interesting inflections—even on filler—can be entertaining or can help drive a point. This is something I’ve noticed a few comedians do when telling certain types of jokes. The premise gets set up, then there’s a protracted “ahhhhhhh” with a hint of a chuckle in it, then BAM, punchline.

There can be a lot of personality in an “um” or ” you know,” but only if you really pay attention to how you’re using the fillers.

#7. No, Really, Embrace the Fillers

Having said all of this about eliminating these kinds of verbal crutches, it’s important to note that they’re not all bad. When I was first getting started, I spent hours editing out all the fillers—some podcasters still do. It’s not necessary. Yes, some speakers are worse than others. If you have an “um” in every sentence you speak, if you begin every thought with “ah,” that’s pretty bad. But these fillers are natural to all of us, and we’re pretty good at filtering them out in our everyday conversations. When we’re listening to people with authority, we expect less filler. Broadcasters and podcasters fall under that category.

The face of authority. Move over, Brian Williams.

Take stock of your verbal fillers and be honest with yourself: do you use these crutches infrequently enough to let them slide, or do you need to work on them?