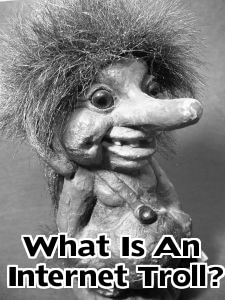 What is a troll? It seems like a simple question, and one that those of us online wouldn’t even give a second thought before answering.

“In Internet slang, a troll is someone who posts inflammatory, extraneous, or off-topic messages in an online community, such as an online discussion forum, chat room, or blog, with the primary intent of provoking readers into an emotional response or of otherwise disrupting normal on-topic discussion.” or so Wikipedia tells me.

But I think this is a definition that is changing before our very eyes, and if we’re not diligent about understanding what trolling is, we could have a very serious problem on our hands. Maybe we already do.

In the coming weeks, I’m going to be posting a series of articles about trolling, online harassment, and Internet behavior, so I think the logical place to start would be here, with the very definition of troll.

To start, I asked Twitter. Twitter knows everything, right? So I asked, “In the length of a tweet, give me your definition for “Internet troll.” Here are some of the responses I received:

@Seth_Waite: ugly little monsters with nothing better to do than leave mean spirited, off topic, and nasty remarks across the web

@elvestinkle: someone seeking reactionary response rather than than a meaningful back and forth discussion #likeafisherman

@ManyaS: One who makes comments specifically designed to generate an often defensive, argumentative or opposing reaction from someone.

What A Troll Is Not

So a troll is argumentative, a troll is a troublemaker, a troll is mean. But are we applying this term too loosely to people online? I’d like to make an argument for people who are often called trolls, but who are not.

Not everyone who disagrees with you is a troll, even if they disagree in a mean or nasty way.

We need to be clear about whom we are calling trolls, because a lot of people who are not trolls are getting lumped into that mix. In my opinion, a troll has to satisfy the following points:

I bold-faced the most important point, the one that can most easily tell you if a commenter is a troll or not.

Sometimes, people leave really negative comments on my blog posts, but at the end of the day, if they are adding something to the conversation, I can’t justify calling them trolls. Even if the conversation is off-topic. Because they’re emotionally involved.

So let’s say that someone comes to my blog, reads a post, and leaves a comment about how my post makes no sense, how they disagree with everything I’ve said, and how everything I do is wrong. They end it with a comment wishing my demise. Stuff like that is not uncommon online.

But is that a troll? I would argue no. They are not commenting in order to disrupt the conversation or get a rise out of me. They truly feel like I’m a horrible person and they hate what I do. Now, if it’s my blog, I have every right to remove that comment if I want, but the person isn’t there to just make trouble. They’re voicing an opinion because they feel emotional about a topic.

The Rise of the Troll Kings

What scares me is the new level of “troll” out there. Or, at least, they’re often called trolls, but I don’t think that’s the right term for them. These people aren’t trolling. Trolling is annoying, but typically harmless. What these people are doing is harassment.

If you haven’t read it yet, I invite you to check out this tale of “trolling,” which tells the story of a feminist blogger named Anita Sarkeesian who has been harassed and attacked since she posted a (since successful) Kickstarter project to raise money for a research project involving the portrayal of females in video games. Anita’s Wikipedia page was vandalized, her inbox was filled with drawings of her being raped, her site was attacked in an attempt to take it down, and her persona information (including phone number and address) were posted in online forums. Someone even made a “game” where the player’s only mission was to click on Anita’s picture to “beat her up” – with clicks revealing increasingly black-and-blue images of the blogger.

This is not trolling, people. This is something far above trolling. If you call that activity trolling, those must be the troll kings, at the very least.

Yet, one of the problems we face is that these attackers are being called trolls and many of them think of their actives as trolling, nothing more. Trolling does not have consequences (beyond occasionally being banned from a website), but harassment does.

Like I said, over the course of the next few weeks, I’m going to be publishing a series of posts about this very topic – online harassment, trolling, and Internet activity in general. For now, though, I’d love to hear your thoughts on trolling. What is your personal definition of Internet troll? Do you agree with me that not all negative commenters are trolls? Do you think there’s a difference between trolling and harassment?